The right coffee mugs can make your morning, as it gives you something to look forward to, even if it might be just a silly cup. Here we’ve assembled some of the best ones that will get your morning started off right, or at least alert people to the fact that you’re not to be disturbed until you’ve had your first cup. 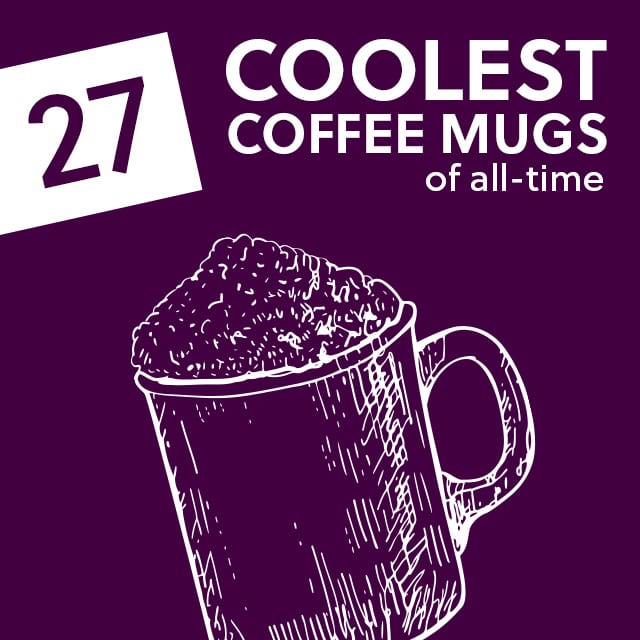 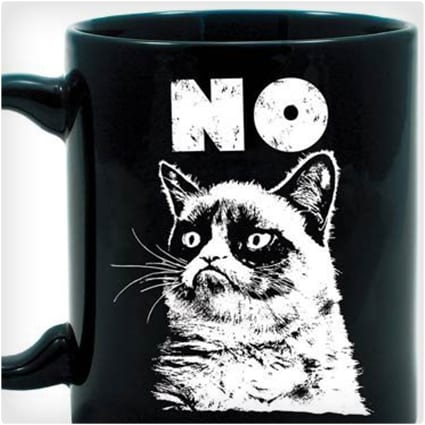 Nobody can deny like Grumpy Cat can, and he’ll be helping to answer all questions for you with this mug. It features a sketch of Grumpy Cat in all his glory, and has the short but sweet No underneath so everyone will know what type of mood you’re in in the morning. 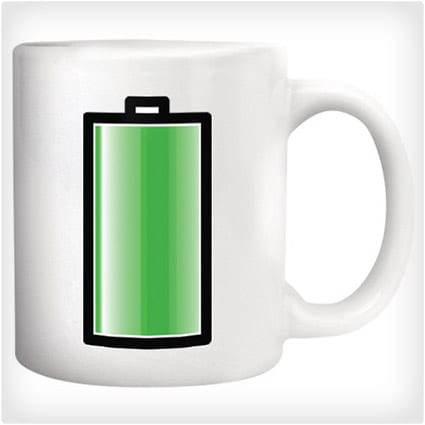 Much like the human spirit, this battery gets recharged when you pour some hot coffee into it. It is heat sensitive so as you finish the copy the battery will deplete until you refill it with your second cup. It looks just like the battery icon on smartphones so it makes the mug look high tech. 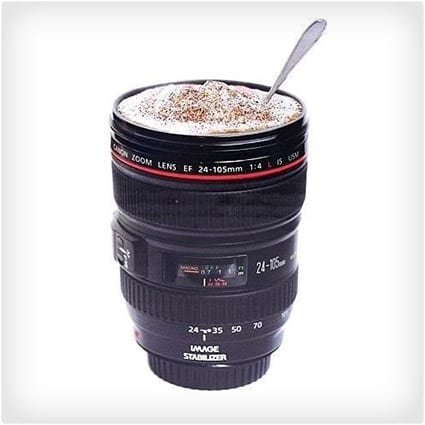 This is the coffee mug to get for the photo bug in your life, as it is resembles a camera lens on one of those fancy a SLR cameras. It even comes with a lid that looks like a lens cap, and you don’t have to worry about forgetting to take the lens cap off because you can drink through it. 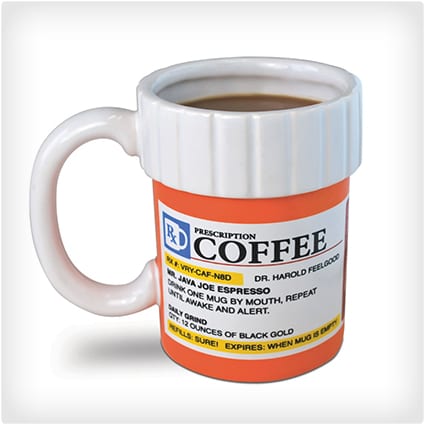 Take 2 cups and call me in the morning. This coffee mug looks just like a prescription bottle and features funny sayings as far as the dosage and recommended use. It even lists how many refills you get and when it expires. It’s a great mug for those that take their daily medicine in the form of coffee. 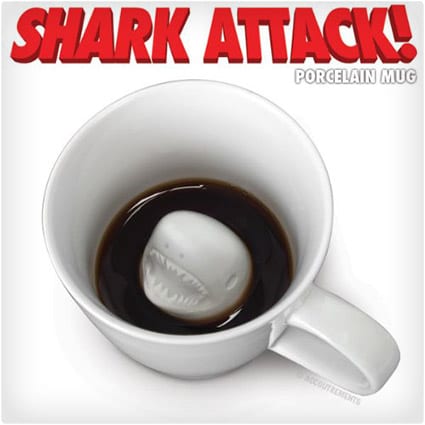 This mug has a porcelain shark that emerges from the depths of the coffee to give you a nice scare in the morning. It also makes a great gag gift for morning company, and is safe for the microwave as well as the dishwasher, so it doesn’t require any special treatment. 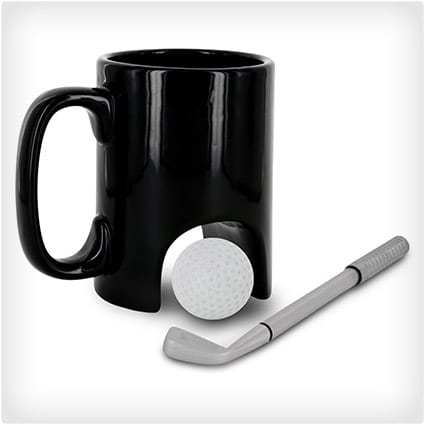 This mug lets you practice your putting because it has a hole that goes through the bottom and comes with a golf ball and club to help you perfect your game. The golf club doubles as a pen, so this is a mug that can help you with your productivity and is truly fit for an executive. 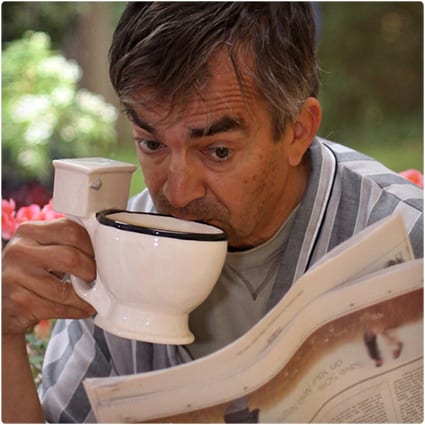 For those with an irreverent sense of humor, this coffee mug looks like a toilet, and the coffee inside it looks like you know what. You can also repurpose this as you see fit, using it as a pot for a plant, a candle holder, or even a candy holder. 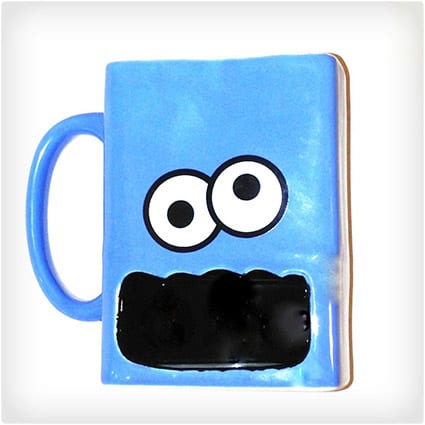 This coffee mug resembles a famous blue monster from Sesame Street and does a great job of holding your cookies underneath the cup. One side of the mug is flat and contains the monster’s face, with his mouth being the part that holds the cookies if you’re brave enough to put them in there.

This cute little mug has multiple personalities, but really just two: awake and asleep. First it starts off sleeping and dark and as you pour in a hot beverage it brightens up and wakes up. If this sounds a bit like you in the morning you may want to get it so you both can wake up at the same time. 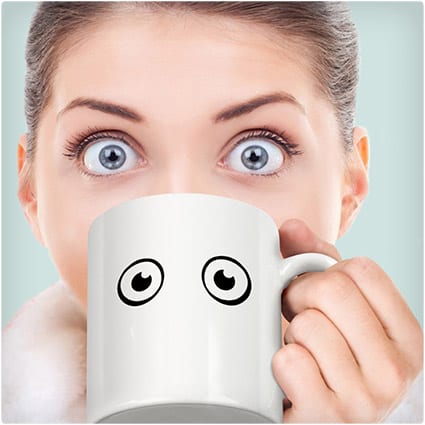 Here’s a mug that starts off with one set of very sleepy eyes, and as you pour in the coffee it changes to a new set of wide open eyes. It’s a fitting mug for those that don’t seem to open their eyes until they’ve had their first cup. 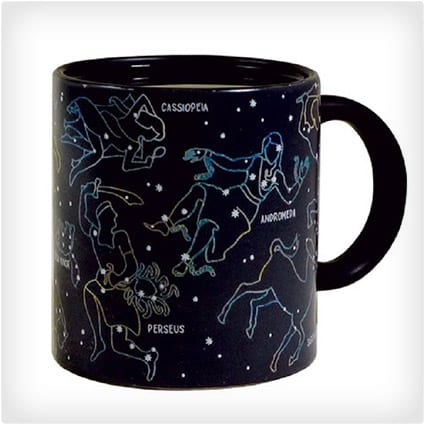 When this mug is cold it shows a starry night sky only. When you pour hot coffee, cocoa, or tea in it reveals the constellations so you know which stars are which. It provides the name of the constellation as well as a picture depicting what it’s supposed to look like. 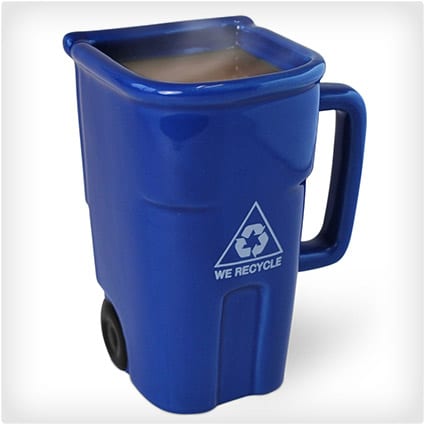 Know someone that is big on recycling and loves coffee? They’ll love this mug that resembles the recycling bin you take to the curb each week. Hopefully they don’t take things too far by recycling their coffee, and start with a freshly brewed cup each day. 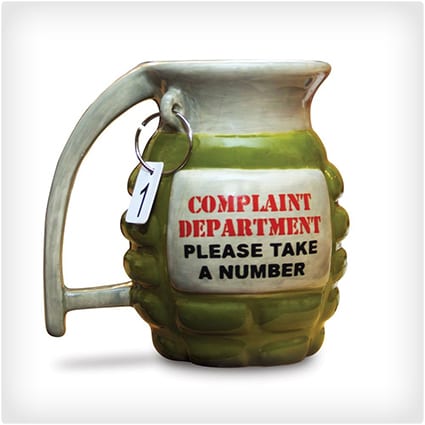 No complaints with this grenade shaped coffee mug. That’s because it lets you take a number if you have a complaint, the only problem is the number is attached to the pin. Message received loud and clear: no complaining until you’ve had your coffee. 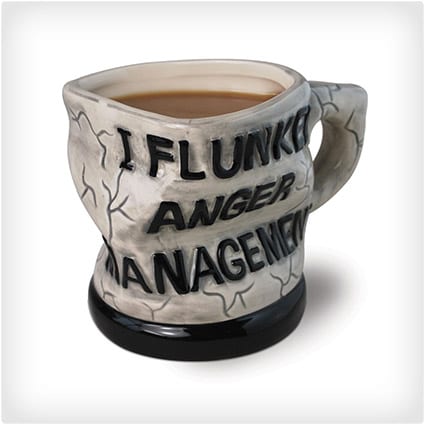 This mug looks like it’s seen better days and gives the appearance that it’s been crushed by the person drinking from it. The message reads that they’ve flunked anger management, and the caffeine from the coffee probably isn’t helping much. It’s dishwasher safe for easy clean up. 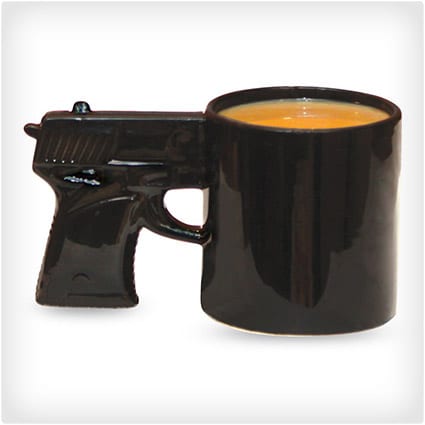 Here’s a mug with a pistol grip that will feel good in any gun lover’s hand. The entire mug is all black, which helps give it a more realistic look. This is the sort of mug you’ll want to reach for when you’re having an especially stressful day, as it’s a much better choice than the actual alternative. 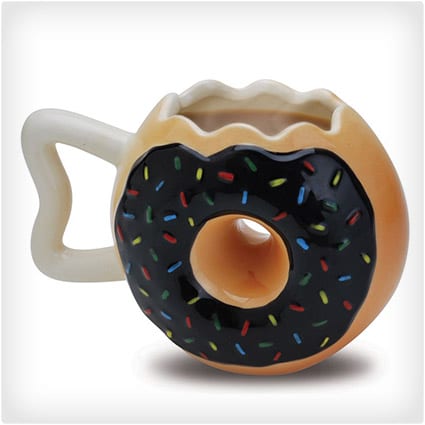 This would be Homer Simpson’s coffee mug of choice, as or represents a common companion of coffee: donuts. The entire mug looks like one big donut with chocolate and sprinkles on it, and of course the required hole through the middle. It has a special handle so it’s easier to hold. 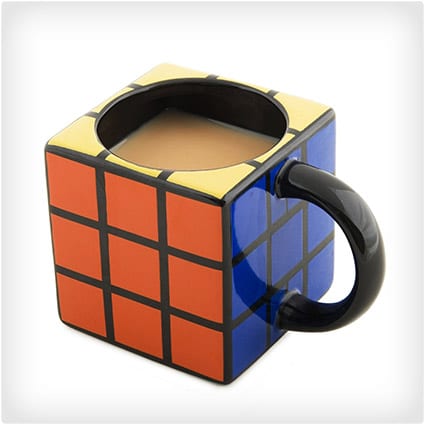 Look no further for the official mug of the Rubik’s Cube. It’s a way to pay homage to the cube that brought you so much frustration as you learned the system of putting its colors back to an arranged order. Since it’s official it looks just like the retro puzzle. 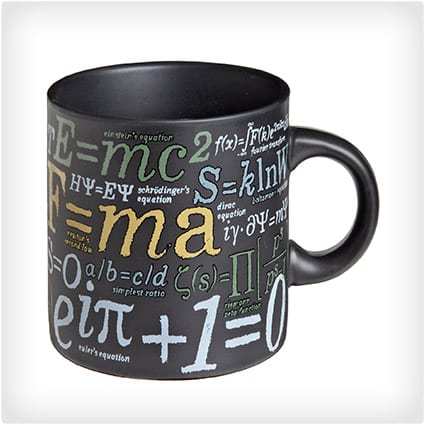 This is the mug you’ll want to be seen with on campus, as it has several mathematical formulas scrawled all around it. You’ll look like a virtual Will Hunting as you proudly display your affinity for math. Just in case you forget, each formula is labeled, as if that would ever happen. 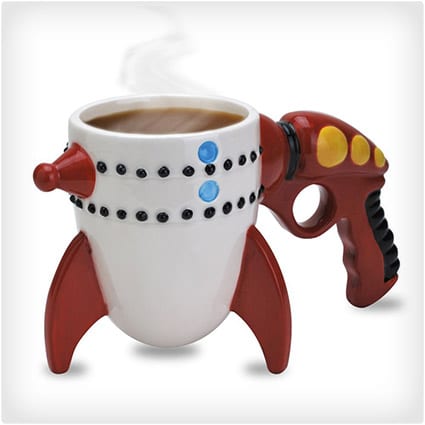 Pow! Zap! This old school ray gun is straight out of a cheesy sci-fi movie of yesteryear. They’ve got it down to the detail with this one, and the gun’s handle is connected to a sort of spaceship from the glory days of sci-fi goodness. 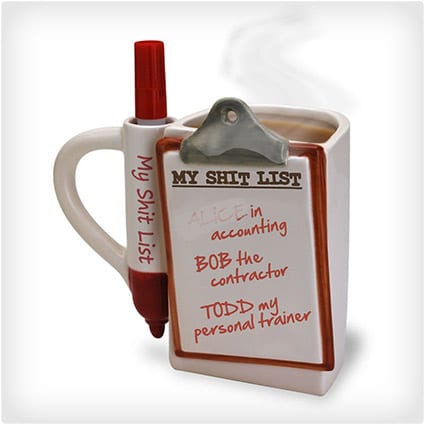 Here’s the mug for someone that openly keeps a list of people they’re disgruntled with. There’s a clipboard and room to write names, as a well as a holder for the marker to do so with. Luckily it’s not permanent, and the names can be erased to add space for new names. 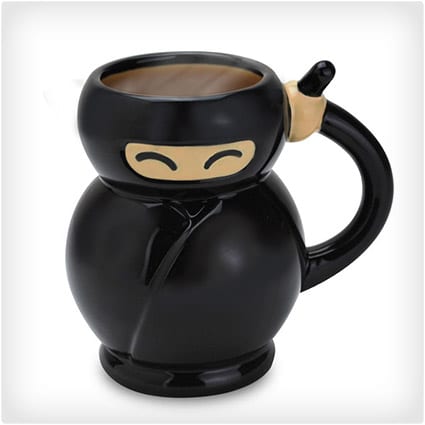 Have you ever seen a ninja hopped up on caffeine? It isn’t pretty. But this mug is really cute and shows a ninja getting ready to unsheath his sword and do battle for the day. This is a great mug for a lover of ninjas, or just someone that quietly takes care of their business in an awesome way. 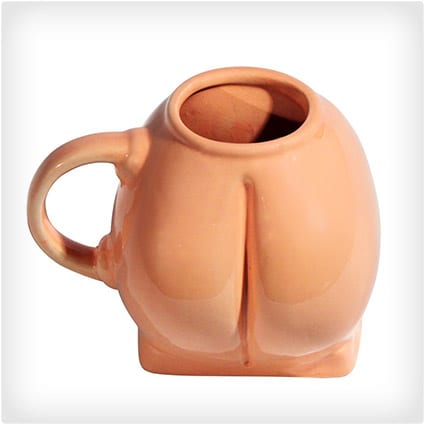 What more is there to say, it’s a mug that’s a butt and they’ve named it Butt Mug. But really, it’s a hilarious gift for someone with a sense of humor, just don’t be expecting any surprises on the other side, as it’s just flat and flesh-colored. 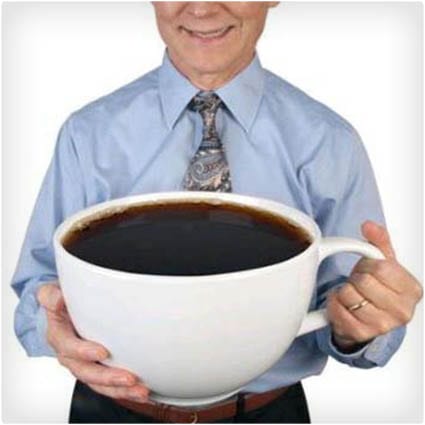 Really, if they try to fill this mug and drink it all before it gets cold they’re going to be wired for quite some time. This is billed as the largest coffee mug in the world, and until we find anyone wishing to contend for the title, we’re going to have to agree. 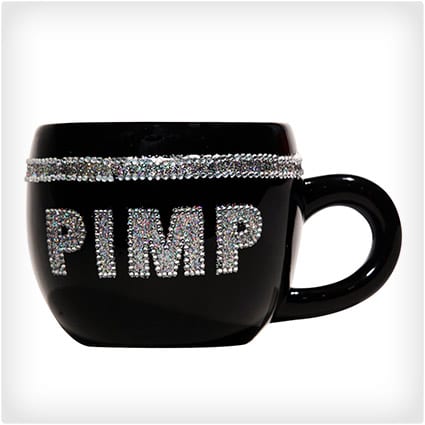 Here’s a mug for those that like to keep their coffee in check while they stroll with a gangster lean. It’s a simple mug that tells it like it is, but tells it with sparkles and glitter. If you’re big pimpin’ at work then this is the coffee mug you’ve just got to own. 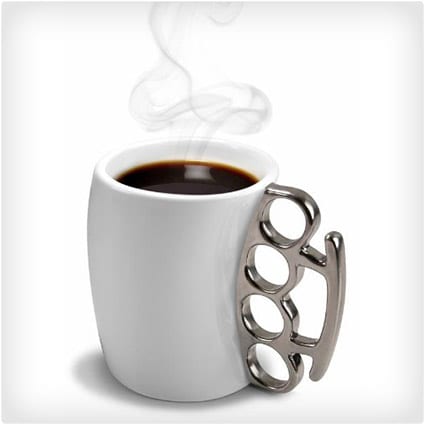 You never quite know when a fistfight is going to break out during your morning coffee, and this mug lets you be ready for it with a set of brass knuckles built right into the handle. Let people know you’re not to be messed with with this outfitted mug. 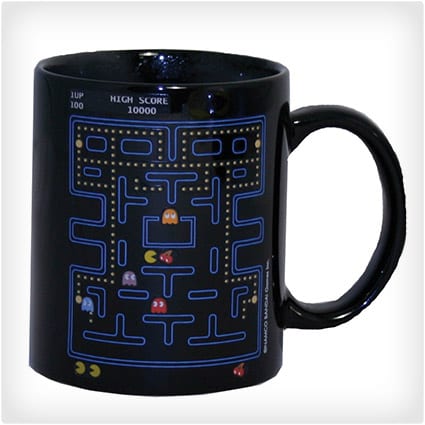 When the cup is empty this is just a plain black mug. Fill it with a piping hot beverage and watch the fun come alive. It shows the universally recognized Pac-Man game, right in the middle of the action. After you finish or the drink gets cold the image fades back to black. 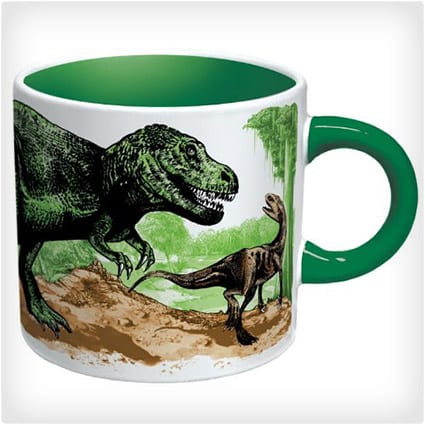 These poor dinosaurs get the same treatment as their ancestors, and as the coffee finishes they turn into fossils. It’s like watching millennia pass before you each morning and gives you a fresh perspective on our place in the universe as well as time itself.