The Teenage Mutant Ninja Turtles have been capturing hearts and winning over fans for nearly three decades, with no signs of slowing down and movies set up to be released over the next several years. No better time than now to shower the TMNT fan in your life with goodies. 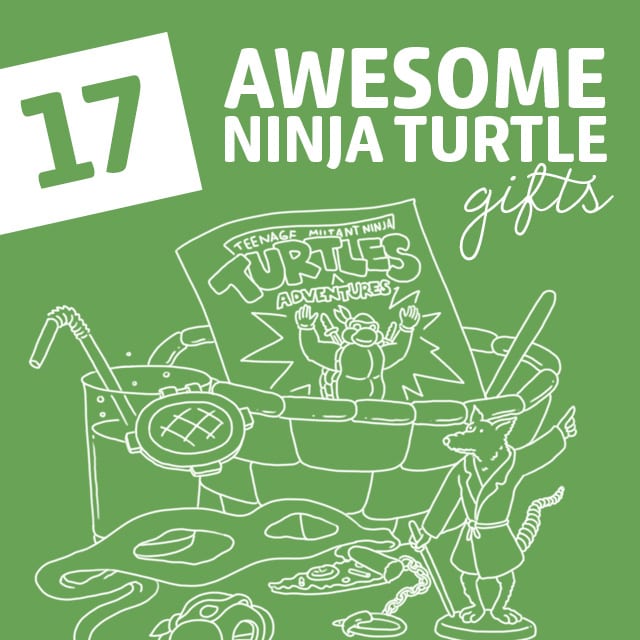 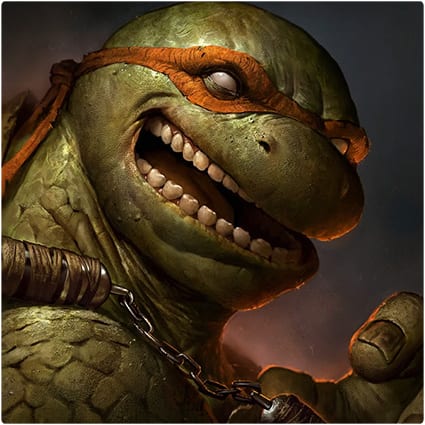 These prints depict what the turtles would actually look like in real life. It presents a vision of a dark world fraught with danger and some menacing mutant turtles that are tasked with keeping evil forces at bay. You can get all four turtles, or choose from a bevy of bad guys. 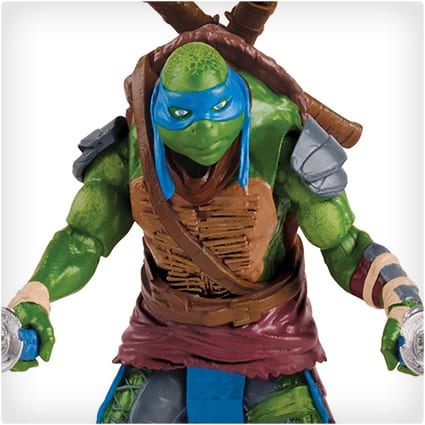 These figures are from the most recent live action Turtles film, and are the new-look turtles, each with special features that are individual to that turtle. Leonardo is the leader of the group, and is a master with the katana sword. This action figure shows him at his fighting best. 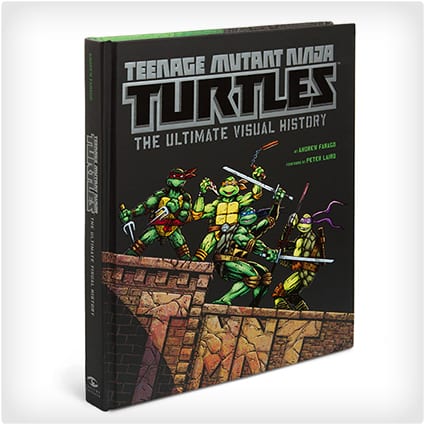 Ultimate Historical Guide to the Turtles

Get a retrospectus on the Teenage Mutant Ninja Turtles that will take you back to the early beginnings so you can see how far they’ve come. The perfect coffee table book for those that are big fans of the turtles, and want to test their knowledge. 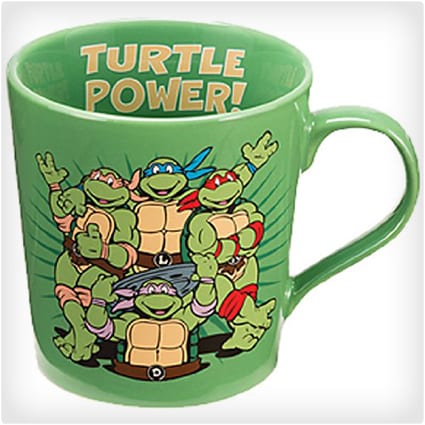 Here’s an old school rendering of the Turtles on a green mug. Each time you drink from it you’ll see the inspiring phrase of “Turtle Power!” to help you through your morning. Of course it features the fab four on the front of the mug for all to see. 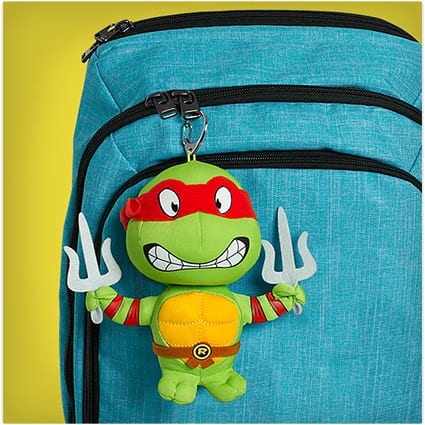 These keychains are just too cute, featuring all of the different turtles with their respective weapons. You can get your favorite one, or splurge and get all four of them to complete the set. They each make a different cute face according to their personality. 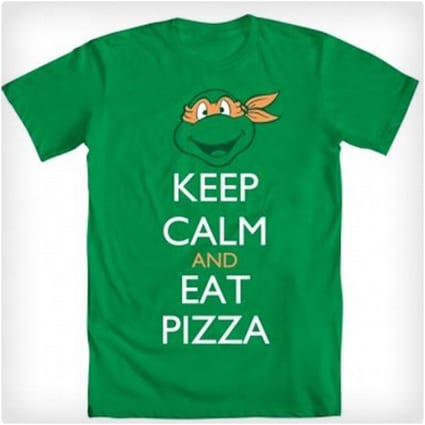 This is the shirt for all those worrywarts out there. Take it from Michelangelo and just keep calm and eat pizza. The Turtles capitalize on the Keep Calm t-shirt trend with their own rendition that is perfectly matched on a green shirt. 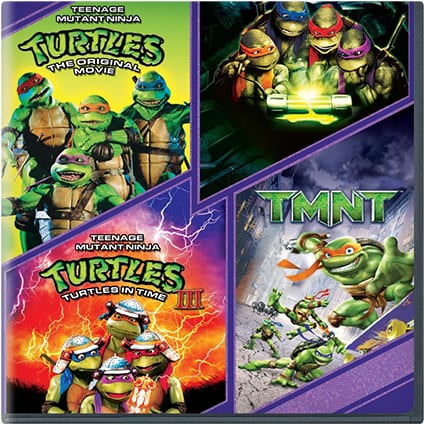 This DVD set is for those that need to get up to speed on everything Turtles and catch up on some of the not-so-good movies they may have missed. This features the original live action film, plus the sequel, plus two other movies in the Turtles canon. 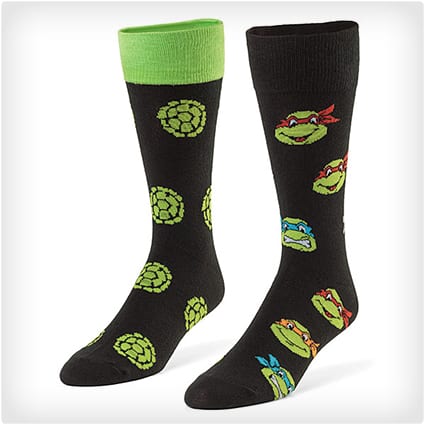 Show your Turtle spirit with these crew socks. You get two pairs of socks with each order, one that has the faces of the turtles on it, and one that has the shells. You can mix and match to be zany, or keep them paired up when you want to be more formal. 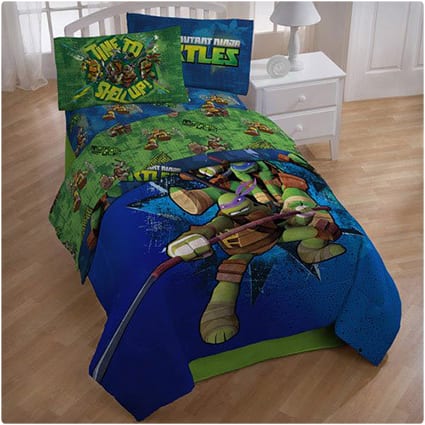 For the little one that loves the Turtles and feels more safe and secure when they’re guarding the bed, this Ninja Turtles bedding is just the thing. Featuring some pretty cool graphics and slogans it’s all they’ll need for a good night’s sleep. 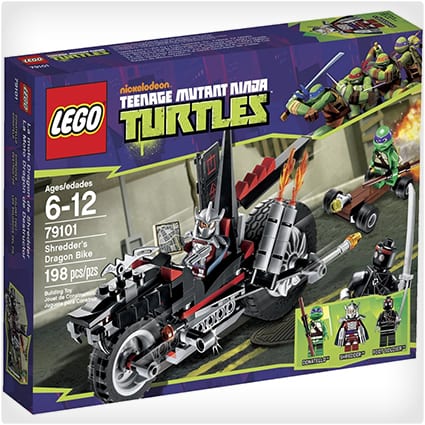 No matter which LEGO set you go with, all of the Turtles sets are rated highly by customers. This is because they make things that are fun to play with as well as build. With Legos it’s fun to build stuff and tear it apart and rebuild it again. 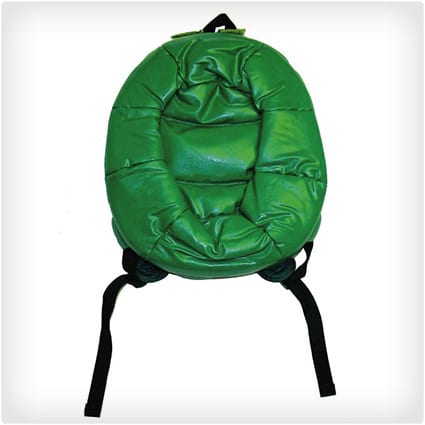 This backpack has plenty of compartments to store all their stuff and when it’s all zipped up and strapped on it looks like a Ninja Turtle shell. It can be used as part of a costume, or as an everyday school backpack if they’re really into it. 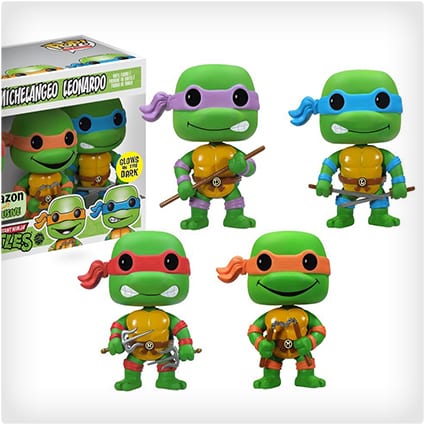 You get all four turtles in this vinyl set, which has them looking absolutely cute. These are great to save as a collectible, or just to have lots of fun playing with. They can’t really reenact a fight seen like the action figures, but they’re a lot of fun to look at. 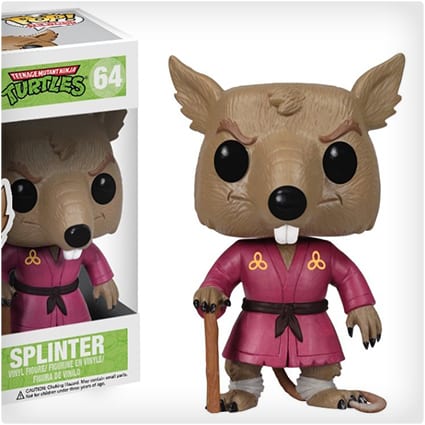 When you have all four turtles, they’re going to need a sensei, and Splinter has never looked better than as a vinyl figure. He’s pretty much a no-brainer gift if you’ve already got the 4 piece set, since he offers guidance to these rambunctious teenagers. 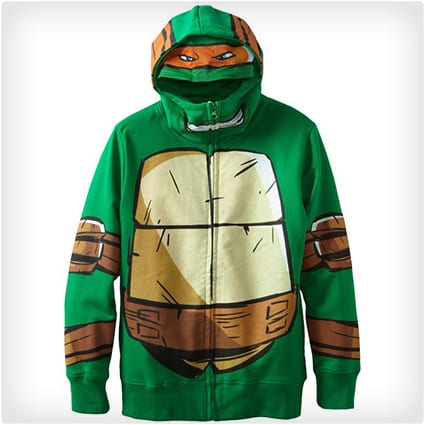 Here’s a way to don the Michelangelo look without having to get into a complex costume. This can serve as a regular hoodie, but once you pull the hoodie up you’ll be in full ninja mode thanks to an eyepiece that gives you a complete look. 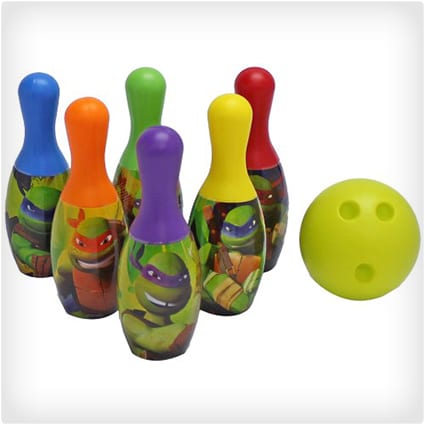 Here’s a fun way to have the Ninja Turtles join you for a game of bowling. This TMNT themed bowling set gets pretty good reviews, and is sure to set you up with loads of fun knocking down all of the characters. 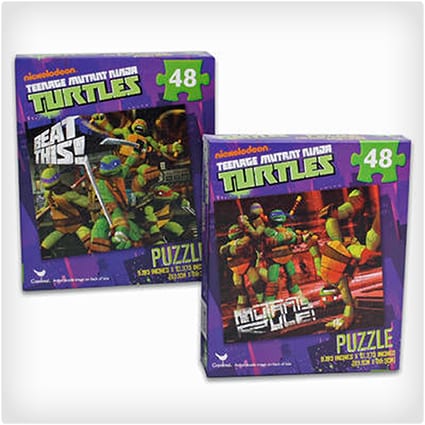 For the puzzle lovers out there this two pack comes with two different Teenage Mutant Ninja Turtles puzzles, each with 48 pieces, so not hard for most to complete. One is of an action shot that says Beat This! and the other is a more relaxed shot that says Mutants Rule! 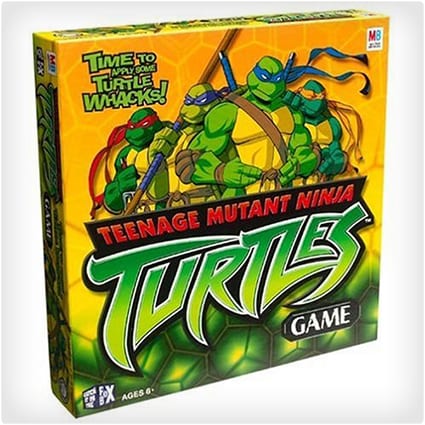 This board game will keep them busy for hours as they get to play a game that is completely based around the Turtles. Roll the dice, move the pieces, and see what happens within the game board universe. Help the Turtles battle the evil Shredder! 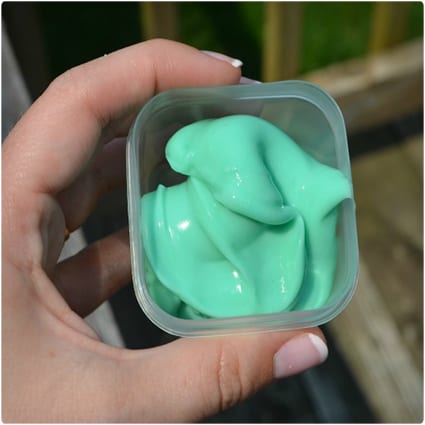 This sewer slime looks just like the kind that oozed onto the turtles and made them into teenage mutants. It’s pretty easy to make once you have all of the right ingredients and follow the steps. Makes a great gift for the Turtle lover in your life. 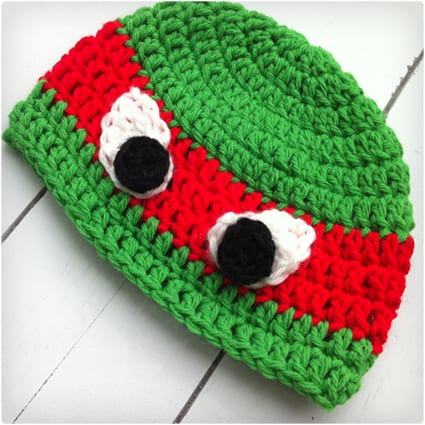 These beanies won’t just keep you warm, they’ll make you look like one of the Turtles. They show you how to make each of the four turtles so you will be able to pick which one you want, or make all four so you have your choice of which to be. 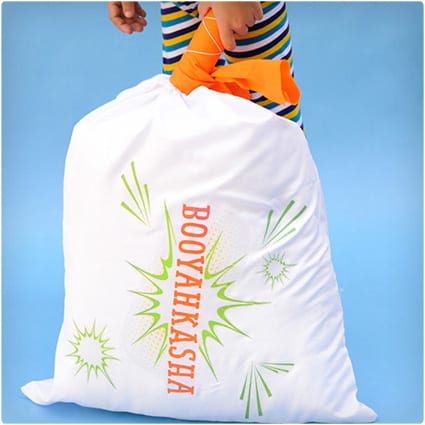 This creates a sort of nunchuck pillow so that you can have a pillow fight in the action style of the Ninja Turtles. It’s a safe way to have fun and play, while embracing the Turtle mantra of not hurting anyone that doesn’t deserve it. 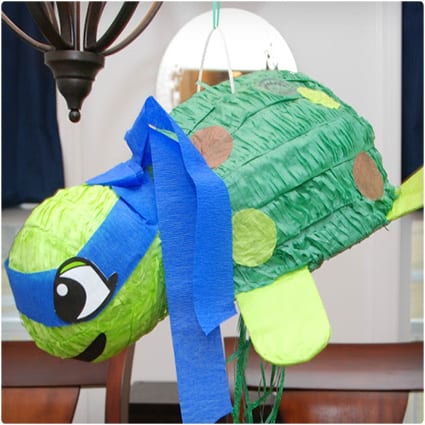 When you’re throwing a Turtles themed birthday party you’re going to want one of these TMNT party pinatas. It looks like one of the turtles, and the shell can hold a lot of goodies and other prizes so they’ll be super happy when it finally gives up its contents. 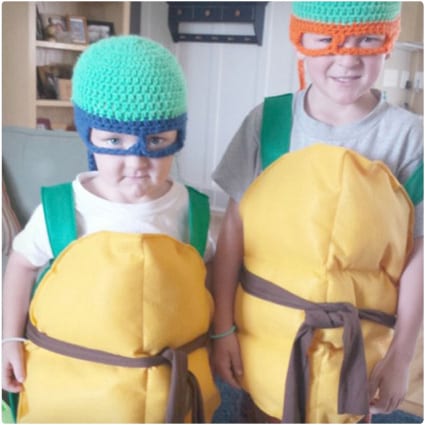 One great gift for the little one in your life that is a big turtles fan is to let them dress up as their favorite heroes. This tutorial will show you exactly how it’s done, shell and all. You can choose between the four turtles so that they will be able to be their favorite. 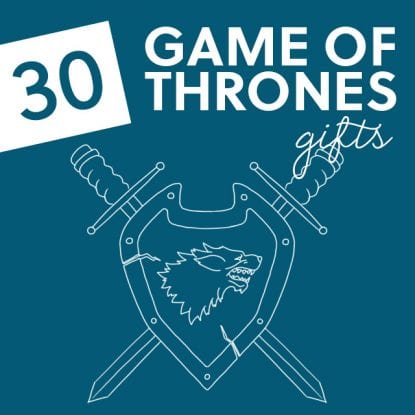 30 Game of Thrones Gifts Worthy of the Iron Throne

Game of Thrones is going strong, earning more and more fans as it trucks along. It’s going to be at least six seasons long, so any of these gifts will last well into the future, and put a smile on the face of any true fan. 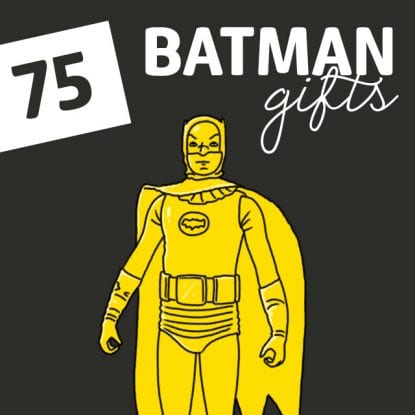 75 Batman Gifts for Fans of All Ages

Batman is the coolest superhero for one reason: he has no super powers. He’s a regular guy—if you don’t count the millionaire thing, the Batcave and Batmobile thing, and that whole dressing up in a bat costume and fighting crime all night. Bruce Wayne is just like you and me. This Batman gift list is […] 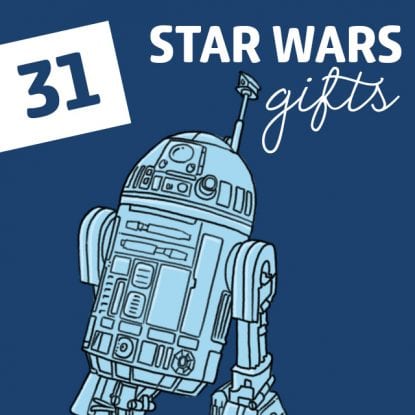 Capture the essence of Star Wars with any of these great gifts. The Star Wars craze is only set to continue with more sequels on the way, sure to be record-breakers upon their release. If the Force is strong with someone you love, honor their nerd-based passion with a gift that they’ll cherish for yours, […] 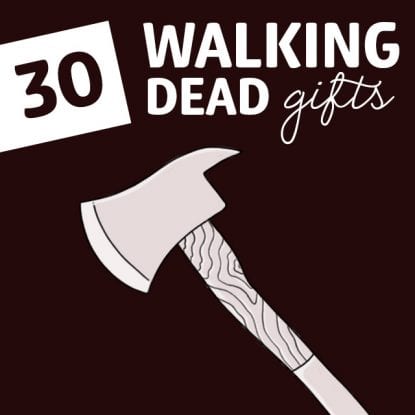 30 Walking Dead Gifts for Lovers of the Undead

Zombies are as much a part of pop culture baseball, apple pie, and rock n roll. After decades of zombie movies, the Walking Dead television show brought the phenomenon to the weekly serial format. Everyone’s favorite zombie fighters are now six seasons in, and it looks like they’ll be fighting strong for years to come. 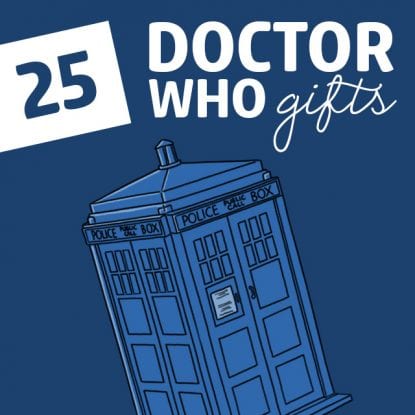 Fans of Dr. Who will love to receive a hand-picked gift related to the show. Give them what they really want, from TARDIS themed gifts to obscure references, it’s all here. Even if you’re not familiar with the series you can still make a confident gift selection. 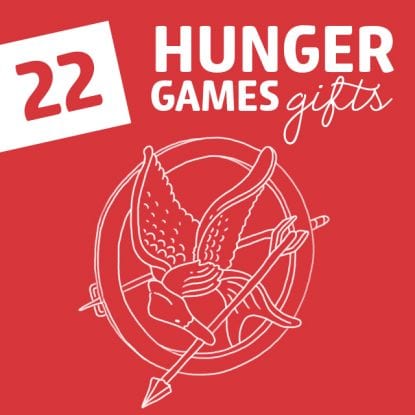 Hunger Games is going strong, with two more films yet to be released, and an avid fan base ready for more. These gifts are sure to put a smile on their face and feature different characters and accessories from both the books and films.