Buying gifts for the Minecraft fan in your life is pretty easy because there are plenty of unique items that only a Minecraft fan would enjoy. As long as the gift has some elements from the game incorporated into it, you’ve probably got a winner on your hands. To make it super simple we’ve picked out the best Minecraft gifts to take away the guess work. 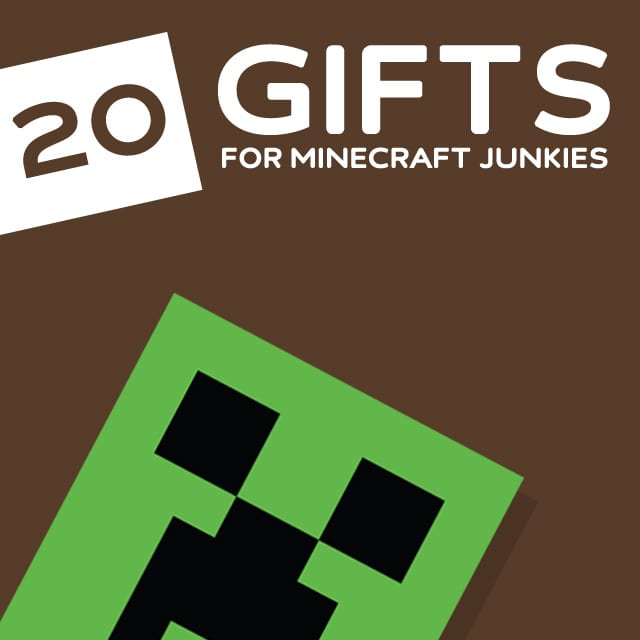 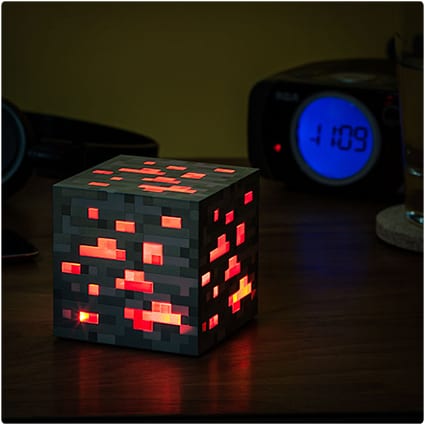 This light-up Redstone Ore will give your room a nice amber glow, and looks just like the real thing from the game. This is an exclusive gift that you can only find at ThinkGeek and they’ve done a really great job of replicating some of the most iconic pieces from the game. 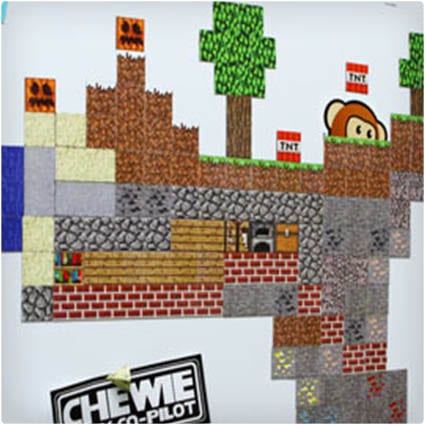 This magnetic sheet set gives you all of the parts that make up the Minecraft world so you can start building. It includes items like Diamond Ore, Redstone Ore, a workbench, and plenty of dirt, stone, and wood. It’s a great way to bring the game into the real world and transforms your fridge instantly. 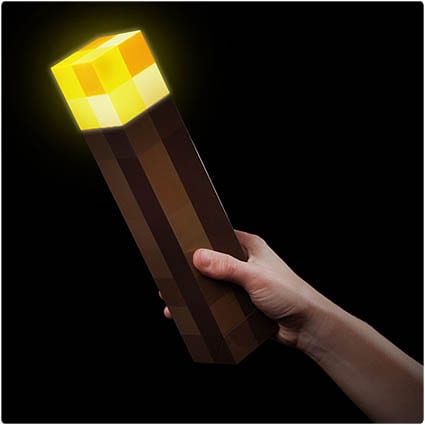 Because the entire game is made up of pixelized cubes it’s relatively easy to make things look exactly like they do in the game. This Light-Up Torch looks just like the one found in the game that helps light your way and comes in handy in countless situations. It’s handheld and also able to be mounted on a wall. 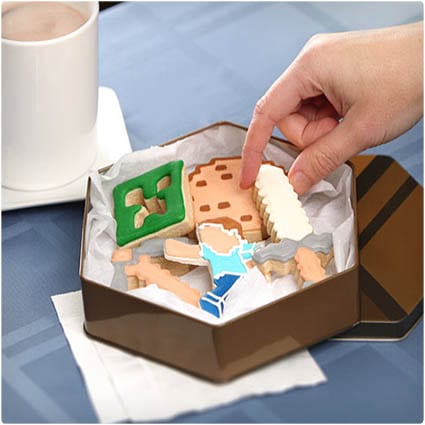 It would be better to get yourself these cookie cutters and then bake up some Minecraft-themed cookies for them as the actual gift. That is, unless they also like to bake. But they probably don’t have time for baking with all of the Minecraft they’re playing, so best to just fuel them on with cookies instead. 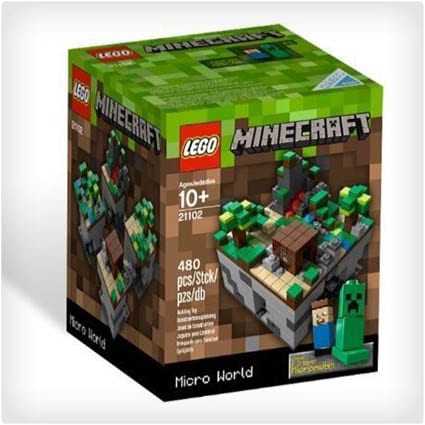 Lego is always reliable when it comes to making faithful re-creations of some of the most popular franchises on the planet. They’ve done Minecraft justice with this set, and you can bet that any Minecraft fan is going to love playing with it. Lego just makes sense because the entire Minecraft universe is made of cubes, and Lego blocks are pretty similar. 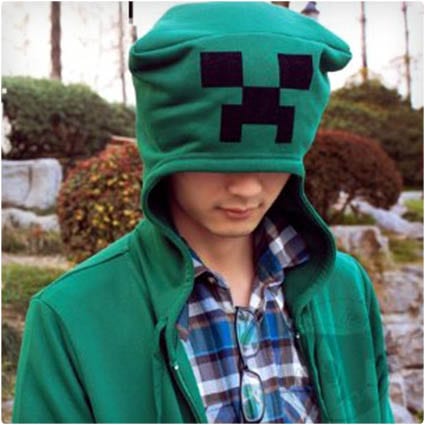 This hoodie looks just like the Creepers from the game. It’s going to be a garment that you can wear that no one else will know what it is unless they’re also Minecraft fans. It is all green, and there is the Creeper likeness on the hood so it only looks right when you are wearing the hood, and with the hood put back it doesn’t look like anything but an upside-down Creeper head. 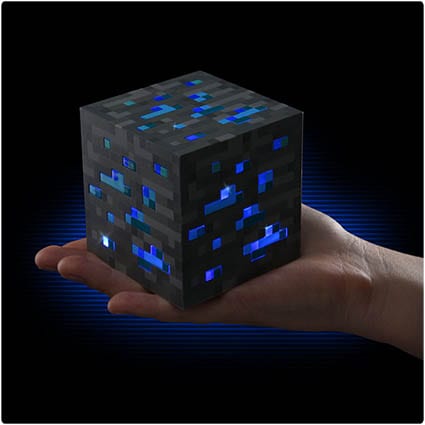 This block of Diamond Ore is something that will transform your room into a Minecraft-inspired realm. It looks very much like the Diamond Ore you will find in the game, and it has three settings so you can turn it on low, medium, or high, depending on what sort of lighting effect you’re trying to accomplish. 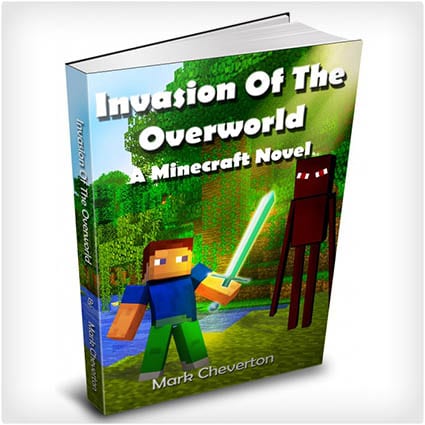 Invasion of the Overworld Minecraft Novel

This book tells the tale of a boy that was fascinated with Minecraft so much that he ends up getting sucked into the game. He then finds himself in the middle of an epic battle, all taking place within the confines of the game. This is a 160 page novella that is sure to be enjoyed by Minecraft lovers. 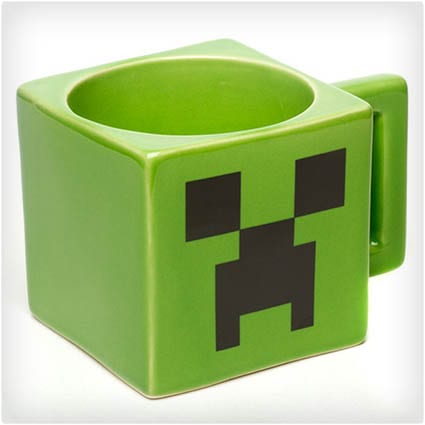 This Creeper mug is actually cube shaped instead of circular to more closely resemble the Creepers from the game. It’s five inches by five inches, and has the unmistakable Creeper face on the front. It’s officially approved by the makers of Minecraft and all that’s required is learning to drink from a cubed cup. 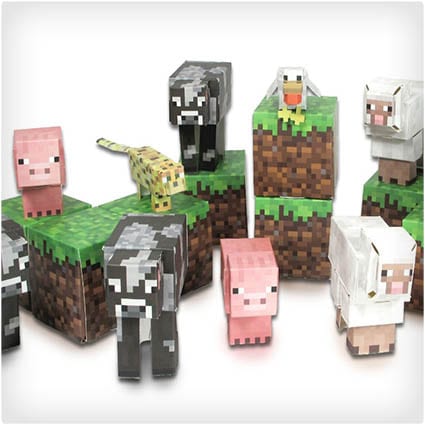 These paper crafts are made to look like mobs, some of the creatures you encounter when you start exploring the Minecraft universe. Minecraft is all about creating new worlds, and with these you’ll get instructions for how to make them. You get a collection including an ocelot, a pig, a sheep, a chicken and a cow, as well as some grassy blocks. 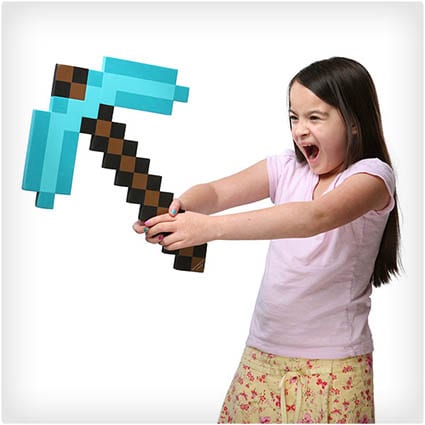 Once you go Diamond you’ll wonder how you ever got along with Wood, Stone, Iron, or Gold. This is the most durable of the pickaxes, and they’ve done a great job of making a life-size foam replica of this handy tool. You’ll get plenty of use out of it, 1,562 uses to be exact! 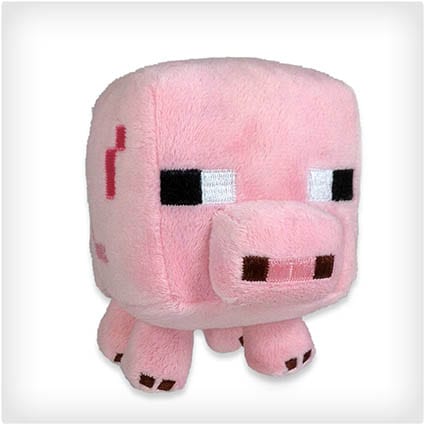 If the baby pigs in Minecraft make them swoon, they’re sure to go head over heels for this plush toy. It comes directly from Minecraft headquarters, so you know it’s going to be an exact likeness of this cuddly cubed creation. 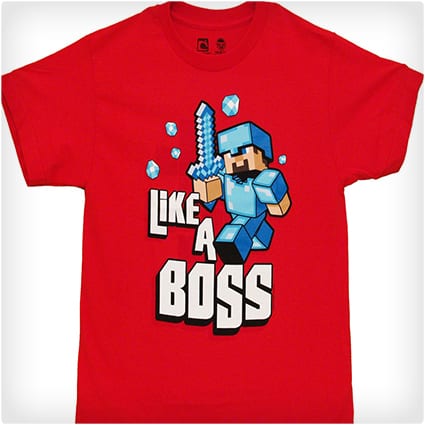 Get your mine on! This t-shirt features the popular phrase “Like a Boss” and features a mob that’s storming through just like one. This has been proven to be a big hit among classmates, and it’s an officially licensed design from the makers of Minecraft. There’s a nice contrast between the red shirt and the diamond Steve. 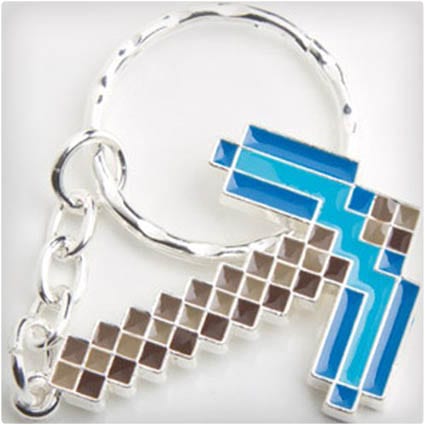 Here’s a trinket that will keep the Minecraft game always on their mind, as if it isn’t already. It’s the diamond pickaxe, which every player can relate to the moment they finally got their hands on one. This is made out of a combination of plastic and metal, and is officially licensed by Mojang. 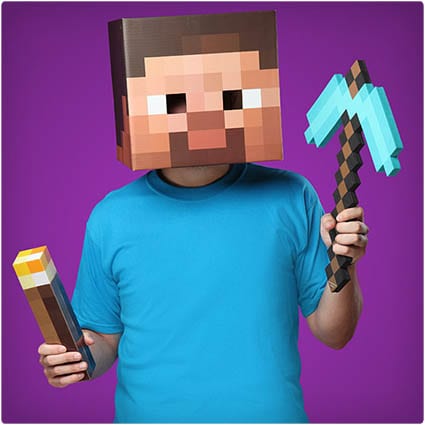 If you’ve ever wanted to look like Steve from minecraft this is the best way to go. It includes a Steve mask, a pickaxe, and a light up torch. Become the player you’ve been playing as and feel what it would really be like to live in a world made up of cubes. 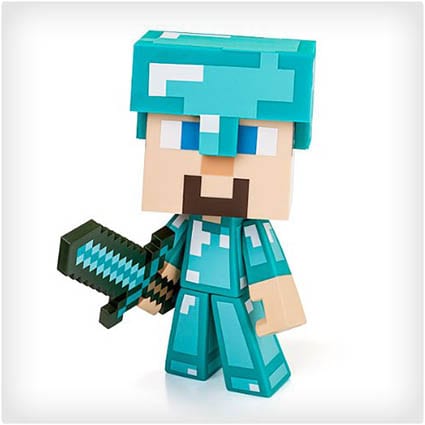 This Diamond Edition Steve has him fully decked out in diamond gear. Of course he has the Diamond Sword, good for 1652 uses against mobs and players. It also has him clad in full Diamond Armor so he’s as protected as he can get. This is a limited edition figure, and comes in a collectible box. 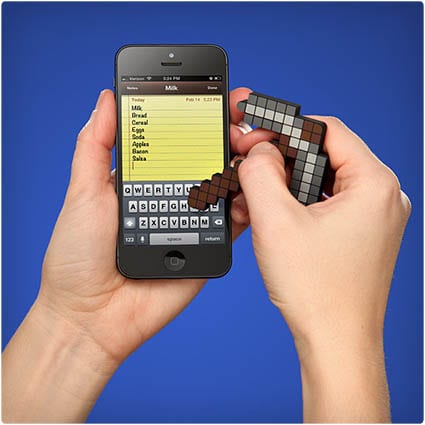 What better way to play Minecraft for Android or iPhone than with this pickaxe stylus? It’s a way of blending the two worlds, and is the perfect item to tap away on your phone with, way better than a finger or thumb. It also lets you be more precise with where you touch, so you make fewer mistakes and have more efficient gameplay. 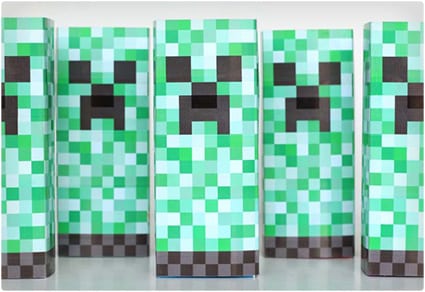 
Dress up ordinary juice boxes to look like Creepers from Minecraft. They are just the right size and shape to do the trick. This can be a fun surprise in their lunchbox, or you can use them as part of a Minecraft party. 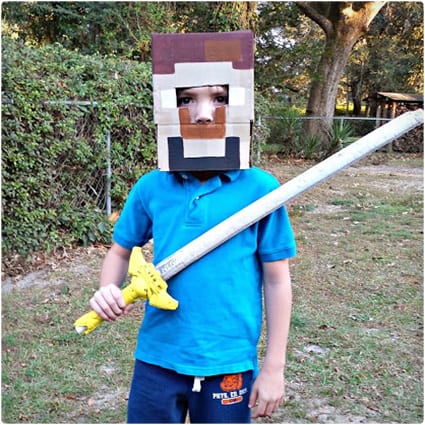 Make Your Own Minecraft Costume


You can’t go wrong with this DIY Minecraft costume. They’ll look just like Steve and can go about the world around them just like they would in the world of Minecraft. It helps bring it into reality and bridge the video game game. 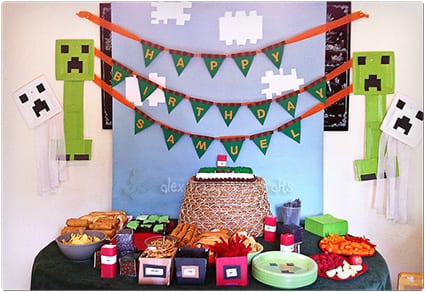 Have a Minecraft Party


This is the way to go all out and throw them the best Minecraft party ever. It doesn’t even have to be their birthday, you can just invite their Minecraft playing friends over for a marathon session complete with decorations. 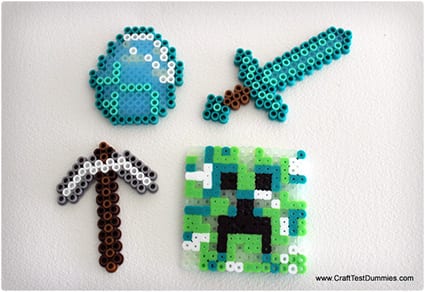 
You can make all sort of Minecraft designs out of perler beads, and they work just right because of the pixelated nature of Minecraft imagery. Try making a Creeper head, sword, or axe out of it, or even try your hand at making a Steve.

(You may also like: 60 Cool Gifts for Gamers of All Ages) 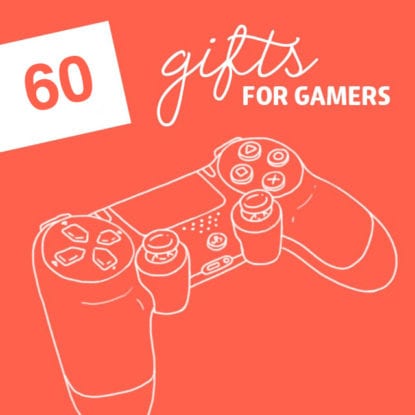 60 Cool Gifts for Gamers of All Ages

Picking the right gifts for gamers is a matter of supporting their habit and spurring on more game play. These gifts upgrade their experience, or bring back memories of games long past. Each will help the gamer in your life continue on with their favorite pastime. 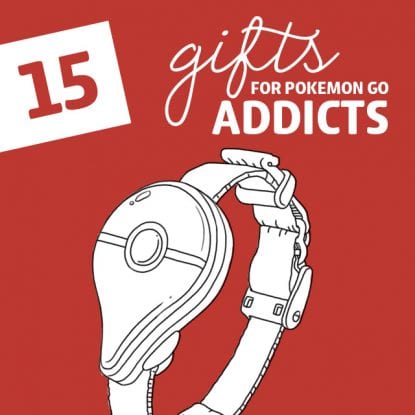 Nothing’s hotter than Pokémon GO, and you can be the best gift-giver ever with a choice from these Pokémon GO gifts. From just the right smartphone accessories to unique Pokémon team themed items you can’t go wrong!