There are plenty of great gifts for American history buffs these days, with artifacts being broken down into small pieces you can own, and thousands of years of history condensed into easy to read and understand books. Choosing a gift for a lover of history is not easier than ever, and we’ve collected some of the best gifts for you to look over and choose from. 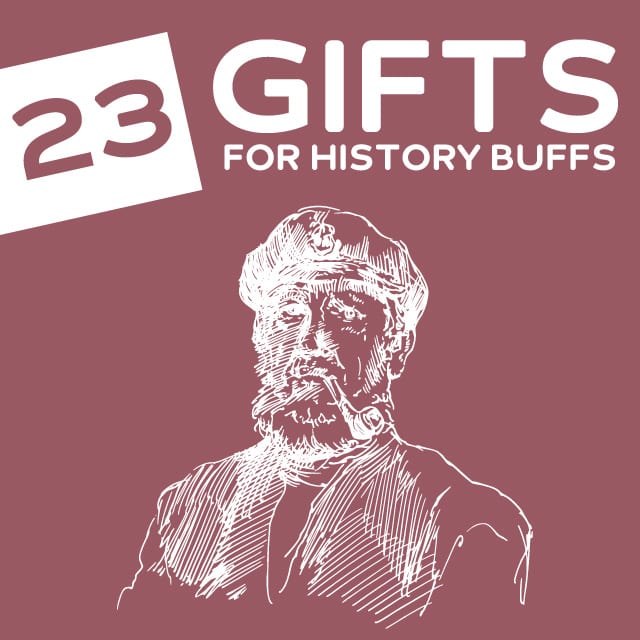 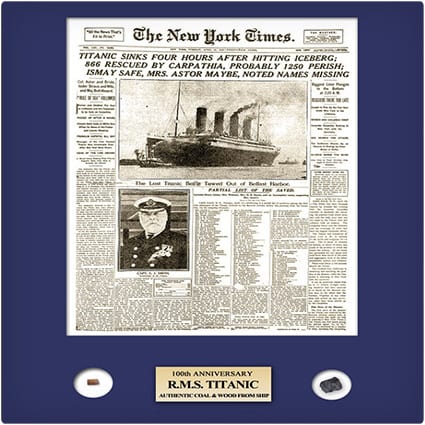 Titanic Page with Authentic Coal and Wood from the Ship

Get an actual piece of the Titanic with this cool gift for history fanatics, or Titanic buffs. It includes the front page of The New York Times on the morning following this great disaster, and pieces of the ship, even this small are in finite supply so get yours before they’re all claimed. 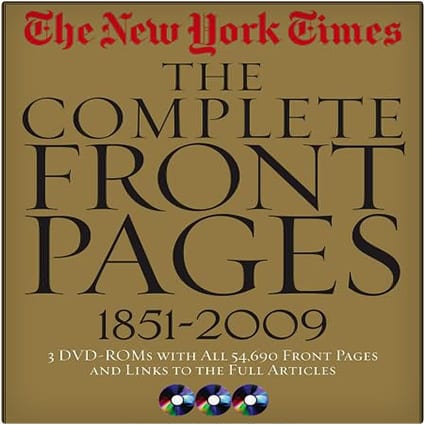 Get a recap of all of the events since the beginning of The New York Times by seeing all of the front pages since the year of their inception. The book includes DVDs to hold the nearly 55,000 pages, so this will take even the most devout history buff quite a bit of time to pore through. 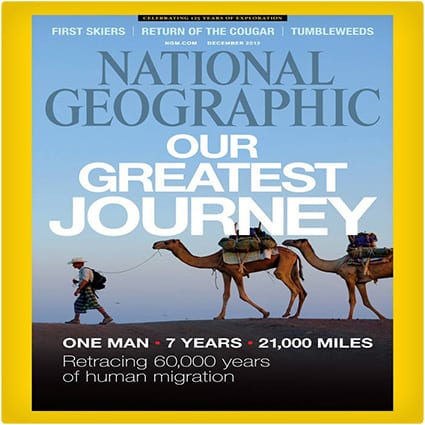 Getting a subscription to the National Geographic means you’ll be getting monthly updates on truly interesting areas and topics from all over the world. There is usually a bit of history in each one, as they delve into ancient parts of the globe. There’s plenty of information to be had in each issue. 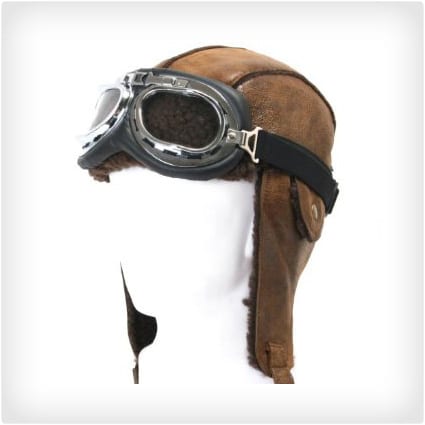 Don this aviator hat and you’ll instantly feel like Amelia Earhart or Howard Hughes. Made to look like an authentic hat, this is something that can be worn, or simply put on display in a library or other reading room of your house. Includes ear flaps and comes in different colors. 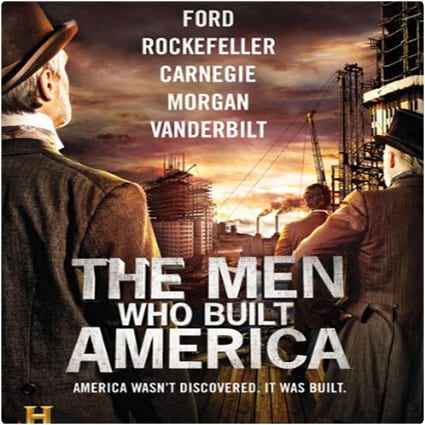 The Men Who Built America DVD

This DVD goes into detail about how America was built by some of the biggest magnates in the different industries including Henry Ford, John D. Rockefeller, Andrew Carnegie, J.P. Morgan, and Cornelius Vanderbilt. See how America became what it is today, and how a handful of power players shaped it. 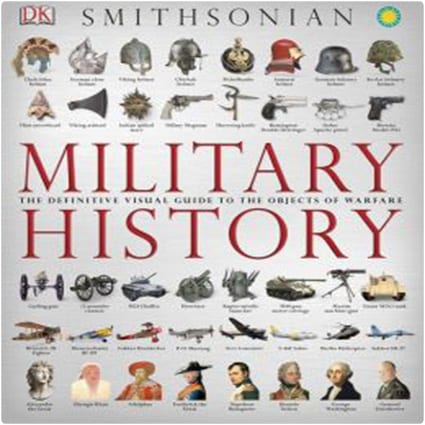 Military History: The Definitive Visual Guide to the Objects of Warfare

Leave it to the Smithsonian to come up with a fantastic visual guide on military history. They have everything from bones and stone weapons all the way to bomber planes and sophisticated weaponry. They also showcase some of the best wartime generals and strategists throughout the years. 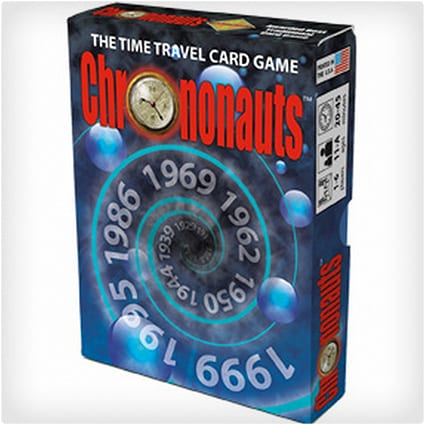 Here’s a game that tests your ability to think quickly and imagine what it would be like to travel back in time. You have to avoid creating a paradox with your moves, and not a lot of historical knowledge is needed, as it’s not a trivia game, but rather pits your time travel wits against your opponent’s. 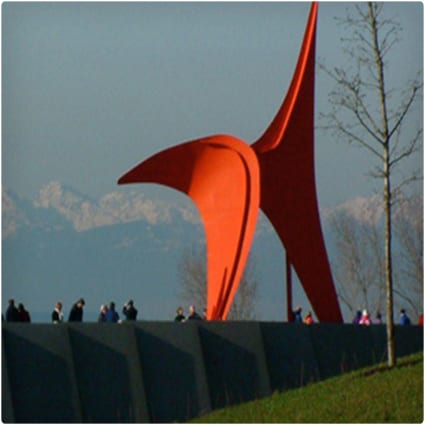 Take a guided tour around historical cities and get information on what happened to them in years gone by. You’ll be able to learn much more than you would on your own, and your guide can tell you things that aren’t so easy to find in history books or websites. 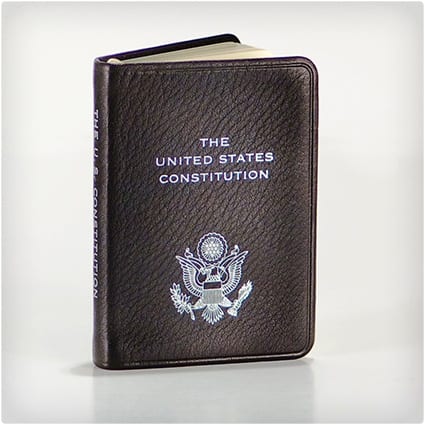 Leather Bound Constitution of The United States of America

Here’s a great way to keep the Constitution of The United States of America handy for quick reference. It’s leather bound to stand up to use, and includes the complete Constitution and Bill of Rights. It fits in the palm of your hand so it doesn’t take up much space. 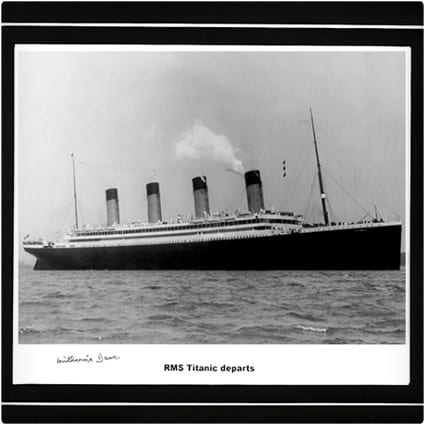 The last survivor of the Titanic died in 2009 so they won’t be making any more of these signed Titanic photo pieces. If you’re a history buff, or know someone that is completely fascinated by the Titanic disaster, they’d love to have something like this to showcase in their home. 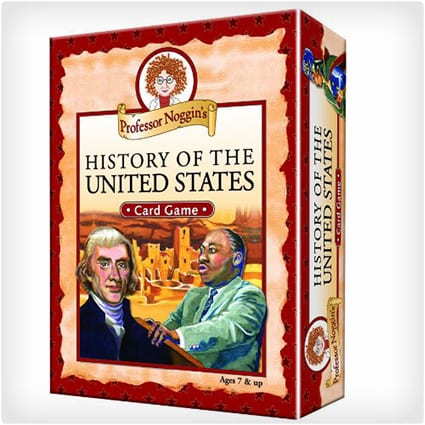 Here’s a game that can help your kids learn about US history in a fun and engaging way. It’s a game that you can actually play with them and enjoy, and it will help them get interested in the things that have gone into making up the USA. 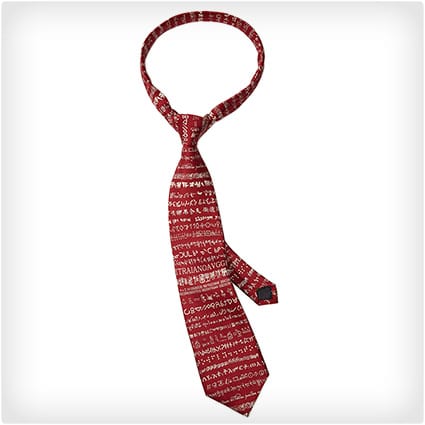 This tie will definitely start conversation with anyone that recognizes it as containing several dead languages. It’s a tie that is inspired by Jud Fine’s sculpture that is built into the steps of the Los Angeles library. It’s great for anyone interested in the study of historical languages. 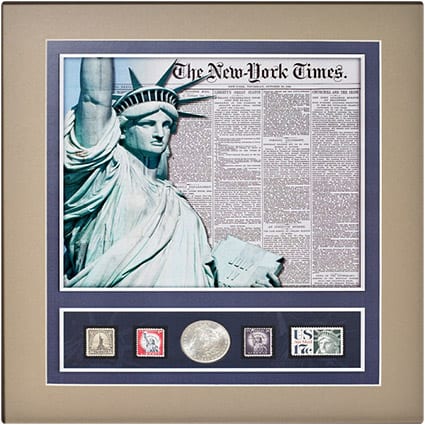 The Statue of Liberty has been a beacon of hope for travelers to the US for years now and you can own this keepsake that comes with a coin from 1886 and includes stamps as well. It’s all encased in a frame so you can hang it up as soon as you receive it. 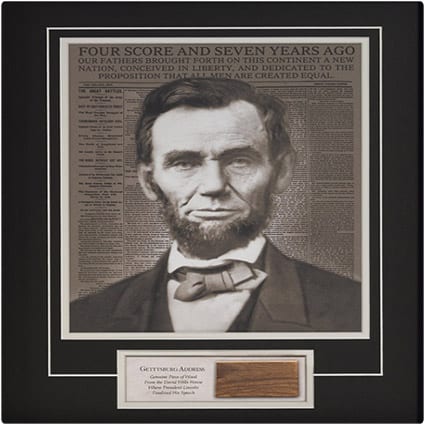 You get to own a piece of history with this Gettysburg Address keepsake. It includes a piece of wood from the Wills House, the house where Lincoln put the finishing touches on the speech that would go down in history as his most profound. The house was renovated and the wood was salvaged. 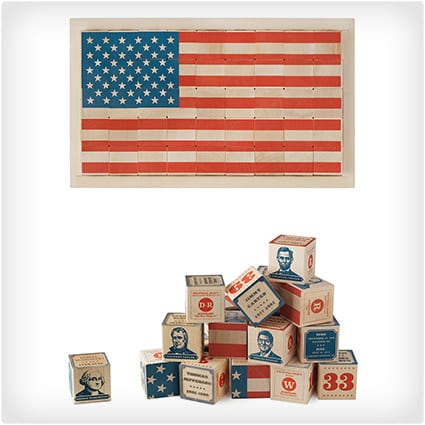 This block set features a block for each president, with facts and pictures on each one. When assembled they form the American flag and come in a nice box that holds them all perfectly in place. The blocks are numbered as well, so you can easily see which number the president was. 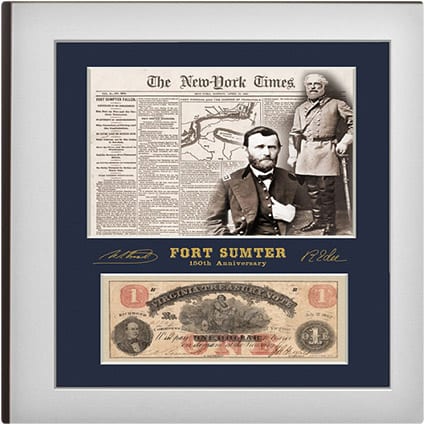 This gift will delight the American history buff because it was created to celebrate the 150th anniversary of the attack of Fort Sumter, the place where the American Civil War was officially started. It comes with a piece of confederate currency and is all self-contained and ready to be hung on the wall. 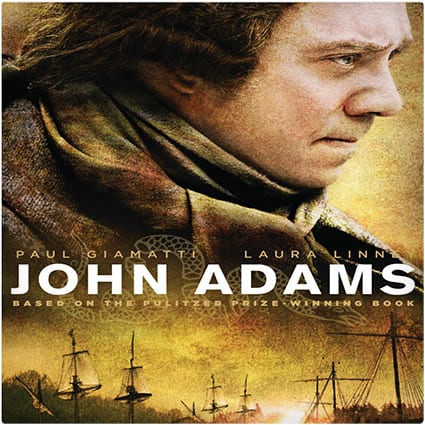 Paul Giamatti stars as John Adams in this 2008 film based on the second president of the United States. It first aired on HBO and is both critically acclaimed and a hit with viewers. A great gift idea for someone that know a bit about John Adams, or who would like to. 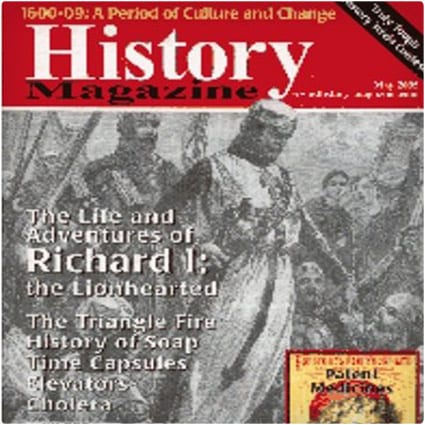 This is one of the few magazines around that is focused on history, and it’s a great way to get a piece of historical information delivered to your door every other month. The topics it covers varies, but you can expect it to be on interesting topics like war and exploration through the ages. 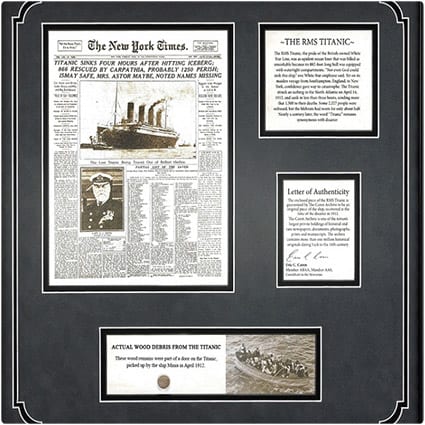 Own a piece of wood from the actual Titanic in this piece that comes from The New York Times. You’re also getting a reprint of the NY Times front page from the morning after the disaster, and it all comes to you framed so all you need to do is hang it up. 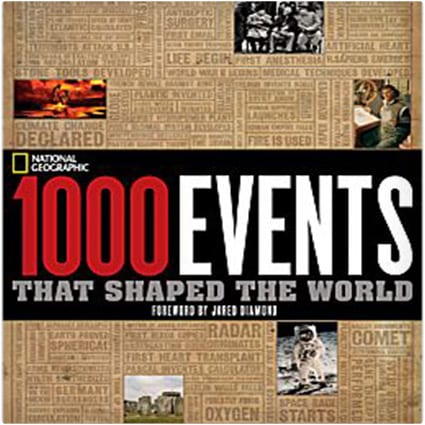 1,000 Events That Shaped the World

They’ve boiled down the most important events that have had a hand in shaping the world we live in today to 1,000 of them, so you can get briefed on them in a hurry. It’s interesting to see how many of these events you didn’t know about, since they’re so important and seem to be effecting the world we now live in. 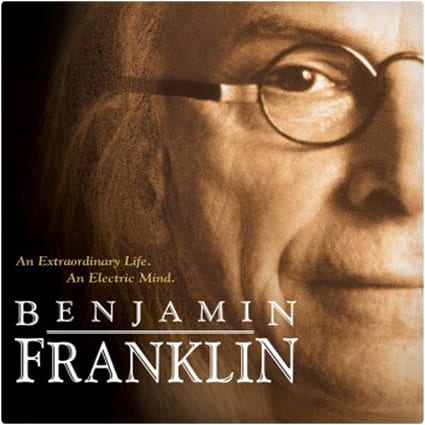 Benjamin Franklin was one of the most interesting figures of his time, at a time when there were plenty of interesting people shaping what would become the United States. He may not have been president, but he has stood the test of time and has found his way onto American currency nonetheless. 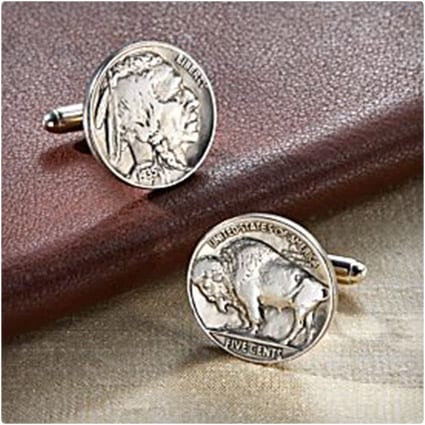 These cufflinks are made with two actual buffalo nickels, one showing heads and the other tails so you can see both sides of the coin whenever you wear them. They also come with a certificate of authenticity so you know you’re getting the real thing and not a replica. 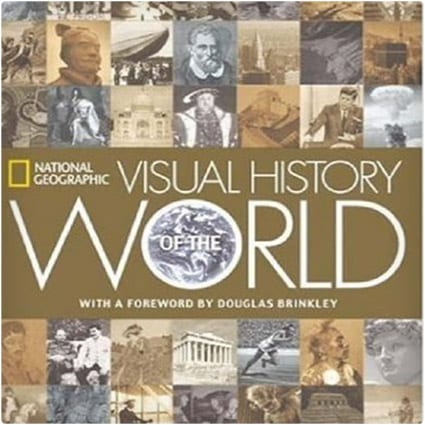 The National Geographic is notorious for their amazing photography, and so they’re the best equipped to provide this visual history of the world. It makes things easy to understand and follow through the many years, so you can get a quick upgrade on your knowledge of what has happened. 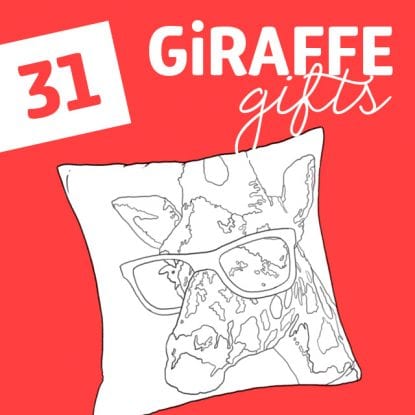 These majestic creatures capture the imagination. Perhaps it’s the long necks—the longest of any animal on earth. Or their size—between fifteen and twenty feet fully grown. Or the fact that they’re so social—you always see groups of them—they have no territories like other animals. This gift list is for giraffe lovers everywhere. 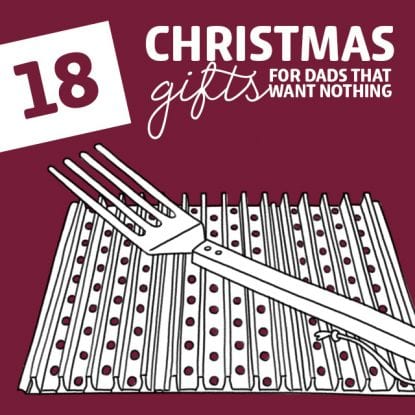 18 Cool Christmas Gifts for Dads That Want Nothing

Here are some gift ideas for dad when he says he doesn’t want anything for Christmas. He’s lying. He wants stuff, he just doesn’t know everything that’s out there. That’s where you come in and give him something awesome he didn’t even know about. 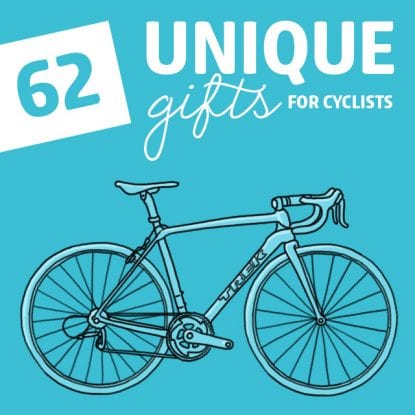 There’s an old saying among cyclists: there are those who love cycling, and those who are wrong. Dedicated pedal pushers spend countless hours on the bike and ride for thousands of miles every year. This gift list is filled with items that will make that saddle time safer, easier, and more fun. 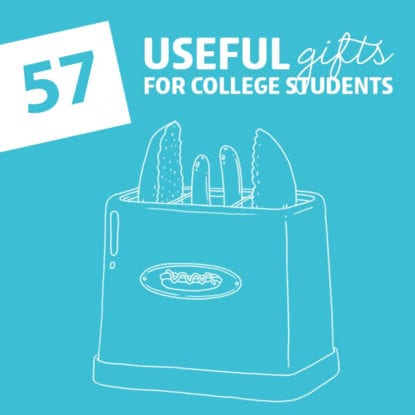 Finding the perfect gifts for college students can be tricky if it’s been awhile since you were in college. A lot has changed, and a lot is still the same. They’re still broke, still have roommates, but now they need a lot more technology. 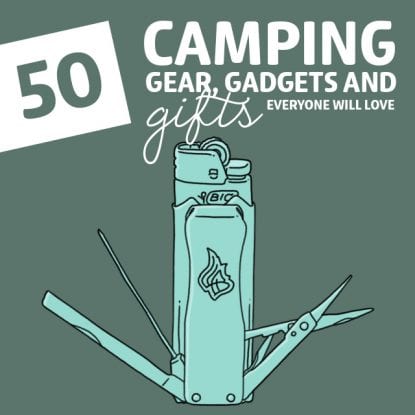 Whether you’re a seasoned camper, a weekend warrior, or just into trying a bit of “glamping” no matter if you’re travelling by foot, bike, car, or in an RV with all the creature comforts these are cool camping gadgets, gifts and gear that everyone will love! 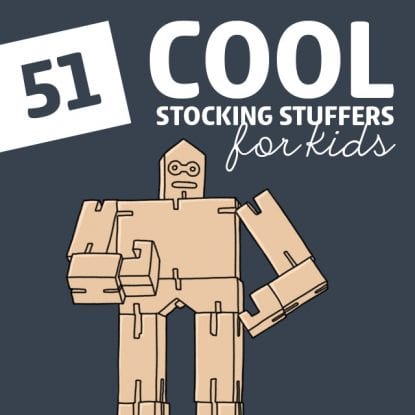 Stocking stuffers tend to be the same, year after year. The gifts become running family jokes. Kids get chocolate, they get socks, and they get candy canes. We guarantee that you won’t find any of those here. This list is for kids of all ages, from youngsters to teenagers.