Every day anniversary cards can seem a little blah to the couple who like the lighter (or darker) side of love. Every card on this list has been hand-picked for its humor and uniqueness, so you can be sure you are giving a greeting which will stand out from the rest and which will have them talking for years to come. 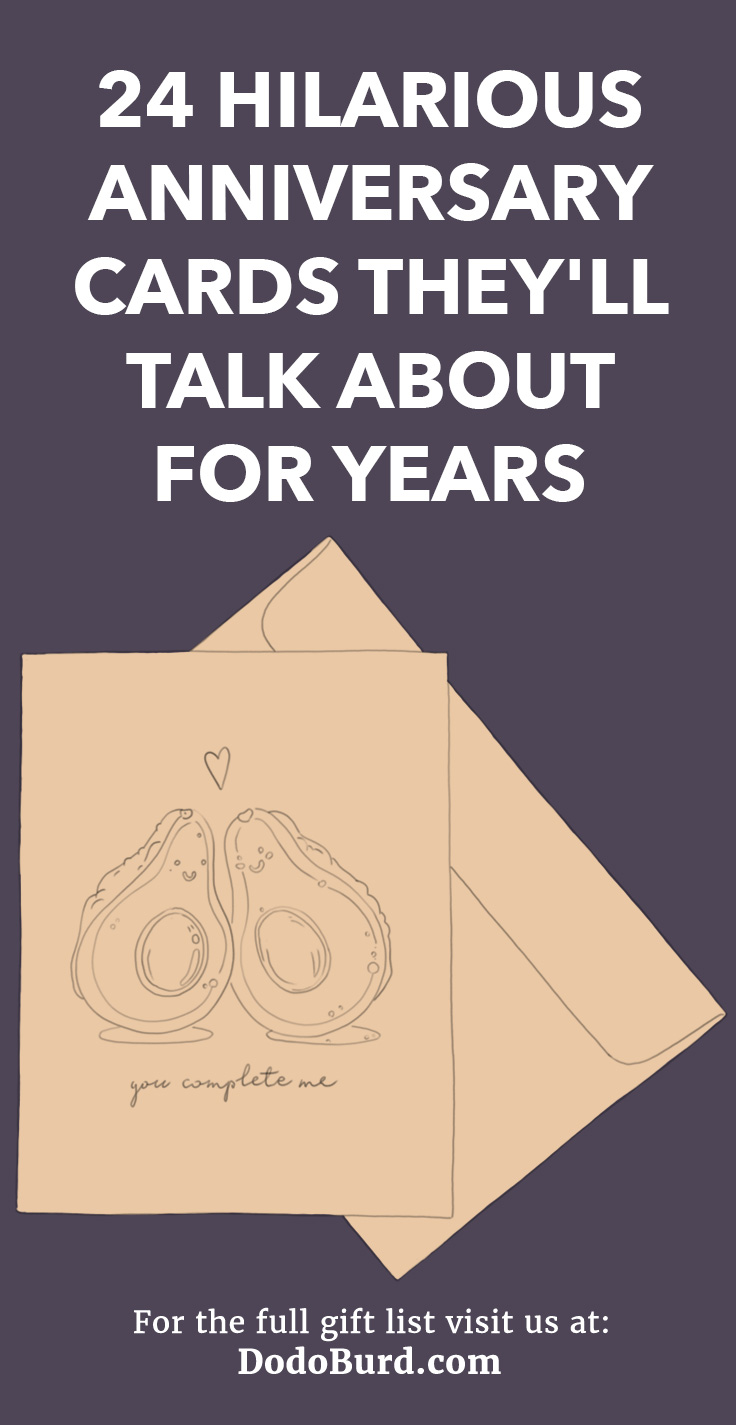 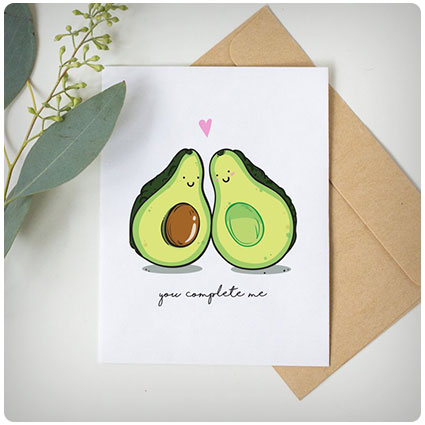 You Complete Me Avocado Card

Like two halves of an avocado, the pair of you fit together perfectly. Celebrate that fact with this super cute anniversary card which features a loved up ‘pear’ on the front. 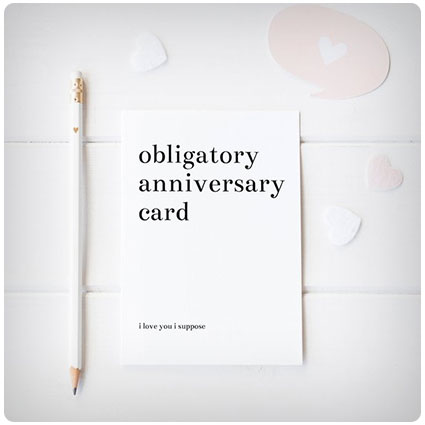 If sentimentality isn’t your thing, but you want them to know you love them all the same, then this card is for you. Simple, stark, and to the point. 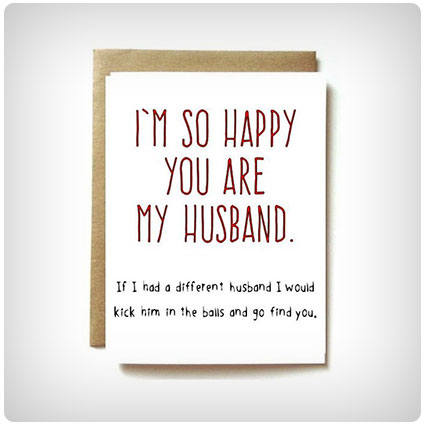 So Happy You Are My Husband

Proving that he is the one for you, no matter what, this hilarious card shows him the lengths you would go to to have him in your life!

The cause of so many marital spats, stealing the bed covers has been well and truly sorted as depicted in this fun oversized card which shows you just how it’s done. 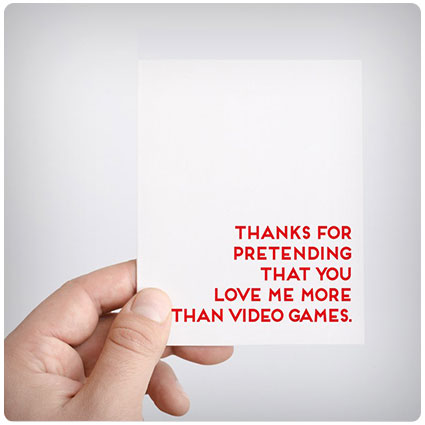 Show your nerd that you understand your place in the pecking order in the home, with this message which tells him you know you come second to his games console. 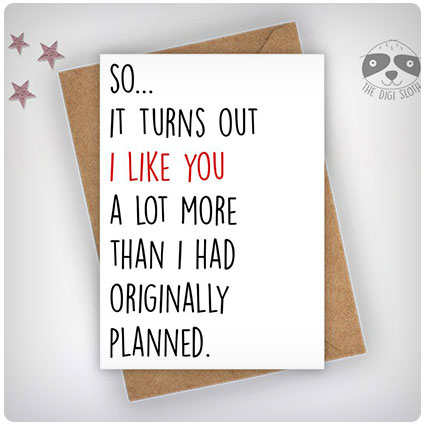 Turns Out I Like You More Than Planned Card

If you’re not given to big displays of romance, how about sending your other half this fun card which tells him how much you love him in a roundabout way. 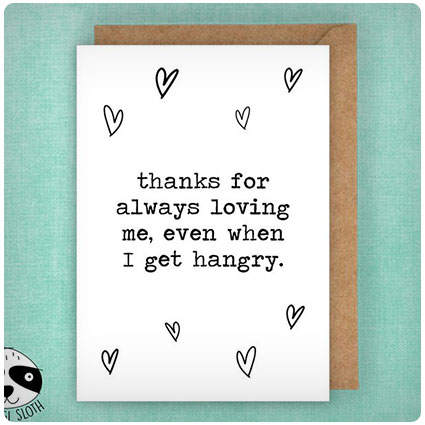 Thanks For Loving Me When I’m Hangry

Hanger can do terrible things to a person, and if you have someone who sticks by you even when hanger strikes, you’ve got a keeper! Tell him so with this anniversary card. 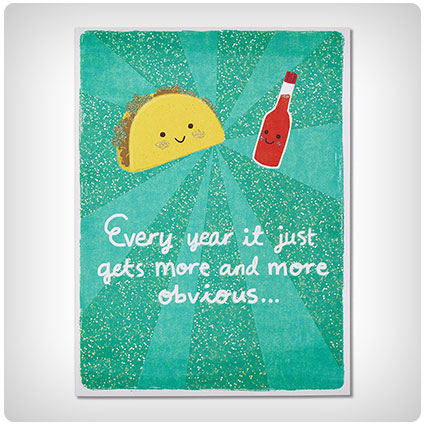 If you know a couple who go together like tacos and hot sauce, this is THE card for them. Full of glitter and glitz, it will touch their heart and soul-sa.

Tell you own special dumpling that you’re in it for the long haul! With a cute picture of delicious gyoza on the front, it’s a fun card for any anniversary. 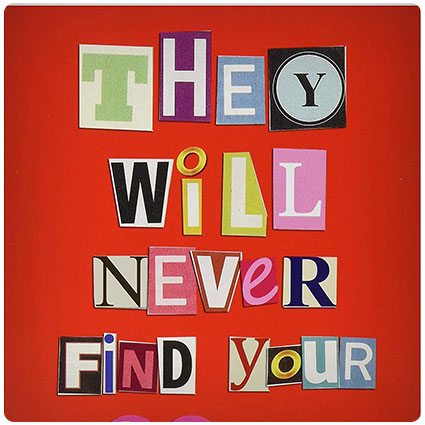 Are they a fan of Criminal Minds? Or maybe they just like the macabre? Either way, this fun card plays on the theme with cut-out letters which spell out the message. 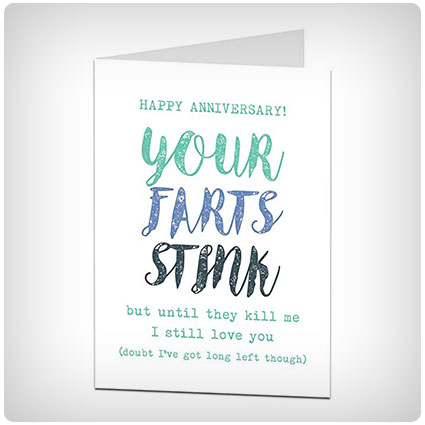 Clearly designed by a long-suffering wife, this card really does tell your husband how much he’s loved, despite the fact that his flatulence will be the death of you. 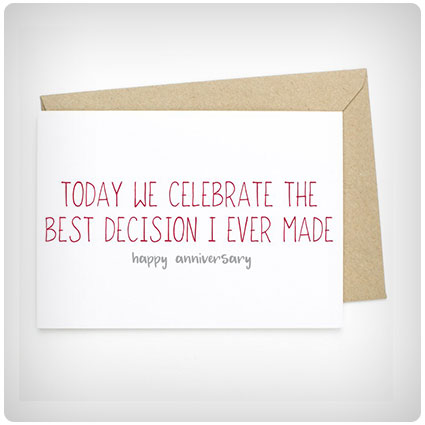 Today We Celebrate The Best Decision I Ever Made

If choosing your other half was the smartest thing you ever did, tell them so with this fun card which features a simple but effective message on the front. 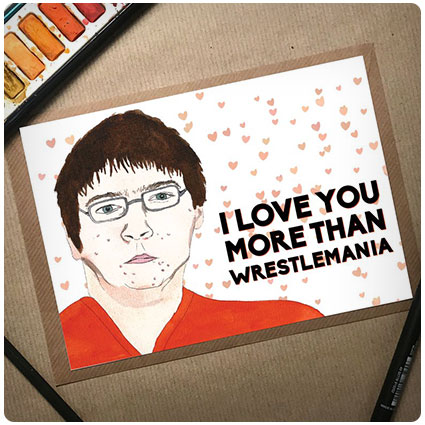 If you want to get your other half all chokeslammed up, this card will do the trick, because it tells them in no uncertain terms just how much you love them. 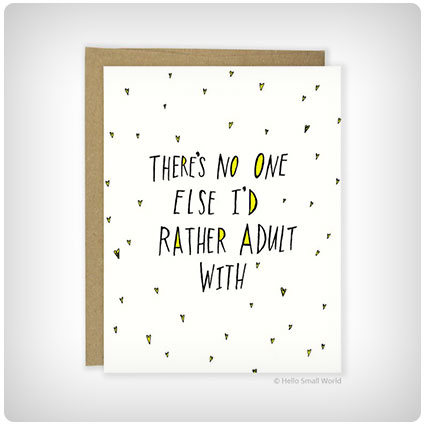 Nobody likes to adult, but if you MUST be grownup, it always helps to have someone there by your side. This card is for the other significant adult in your life.

If you two go together like bread and butter, then this is the anniversary card you need for your ‘butter’ half, to show them you’re still going strong. 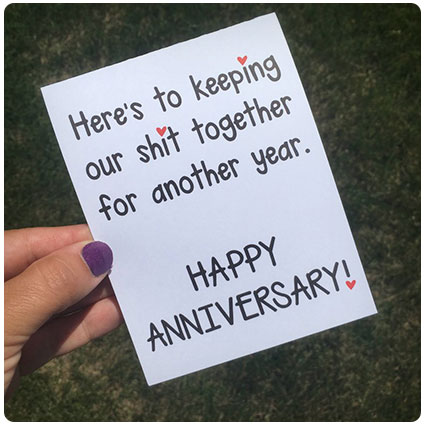 Keeping It Together Card

Happiness is all about sticking together through any adversity, or – as this card puts it – keeping your s**t together! Look forward to another 12 months of the same. 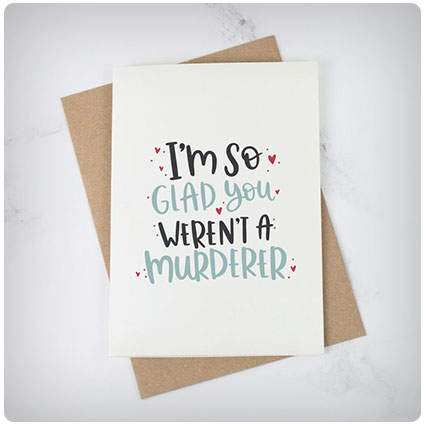 I’m so Glad You Weren’t a Murderer Card

First dates are nerve-wracking – will he like me? Will she turn up? Are they a murderer??? Show your relief that they passed all 3 with flying colors – especially the last one! 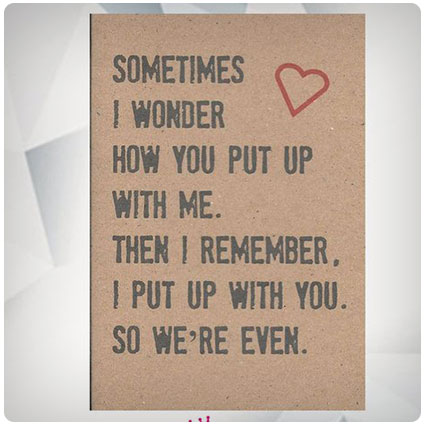 Sometimes I Wonder How You Put Up With Me Card

Sacrifice works both ways – for all your annoying habits, they will have some too. So say thank you, in a roundabout way, with this fun card that recognizes the price you both pay.

Love him or loathe him, this anniversary card will make your other half laugh when they open it over their morning covfefe, because in a world of fake news, your love isn’t. 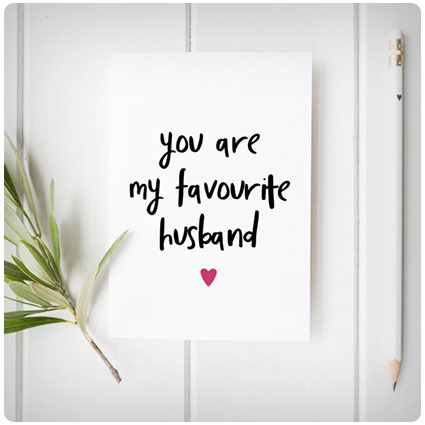 Even if you had a multitude of husbands (the mind boggles), tell him that he’s your favorite by sending him this card which shows that he’s the cream of the crop. 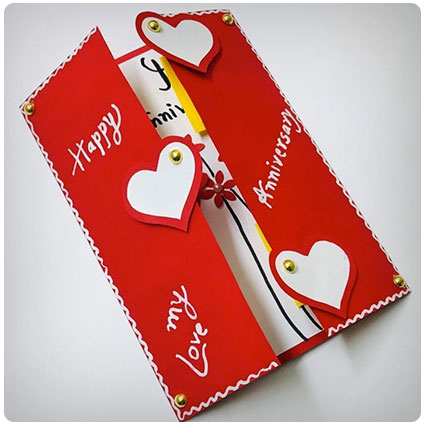 This card is really cute, and can be adapted to suit not only an anniversary, but Valentine’s Day and birthdays, too. Just follow the video tutorial to find out how.

Very simple to make, this card uses just white and colored cardstock and sticky foam pads to create a simple but effective 3D greeting – let your imagination run wild with colors and shapes.

This is an adorable way to make a homemade anniversary card, which comes with lift-up flaps that can be decorated with text, pictures, or even photographs for a totally personalized version. 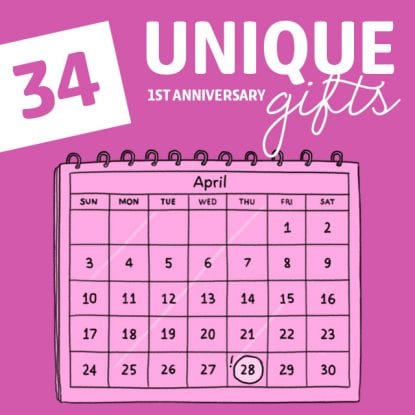 34 Unique First Anniversary Gifts to Celebrate One Year Together 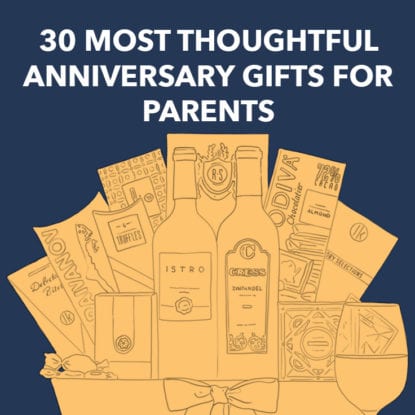 30 Most Thoughtful Anniversary Gifts for Parents – Unique and Hearfelt

Celebrate your mom and dad’s special day in style, because without them, you wouldn’t be here! There are some truly gorgeous ideas around for anniversary gifts for parents, and we think we’ve captured some of the best and most thoughtful and heartfelt presents that will probably bring a tear or two to their eyes (which […]

68 Jaw-Dropping Anniversary Gifts That Will Leave Her Speechless

The best anniversary gifts for her are not that hard to find, you just need to know where to look. The following page contains all of the inspiration that you will need to keep your woman feeling special. 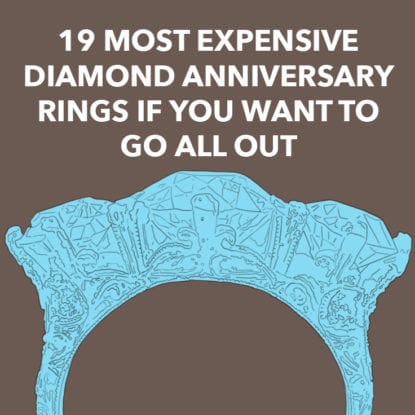 60 years of marriage is quite an achievement, and should be celebrated with a special gift which shows her that you love her just as much as the day you slipped a sparkler on her finger 6 decades ago. These diamond anniversary rings are beautiful, and range from simple to extravagant, but one thing’s for […]

Associated with joy and prosperity, sapphire make a very fitting theme for a 45th anniversary gift, but don’t think you will be limited to jewelry! In among the stunning rings, earrings, and necklaces in this list you will find other traditional gifts which pay homage to this royal blue stone with a little out of […] 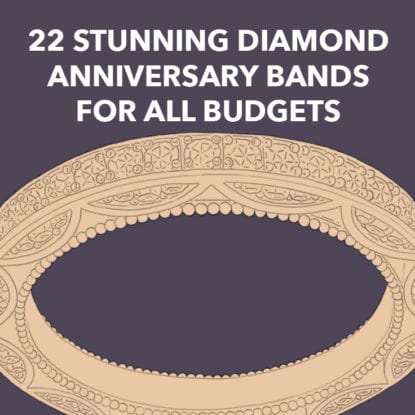 Whatever your budget, there is a diamond anniversary band to suit in this stunning collection of sparkling rings. Giving rings is so symbolic – after all, if you hadn’t exchanged them at your wedding you wouldn’t be celebrating an anniversary now, so why not bring back some of that nostalgic romance with another ring that […]